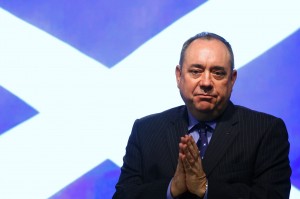 It’s been the worst kept secret in British politics for some time now, but at last it’s gone above ground: Alex Salmond will run for a Westminster seat in the 2015 general election and has picked his constituency. It’s….Gordon. Oh.

It’s a very strange seat for Salmond to have picked for several reasons. One, the north-east of Scotland is not exactly a hotbed of secession, “45” spirit nationalism. In fact, Gordon is a part of the country that voted No by the largest margin in all of Scotland on September 18th.

Two, it is a seat currently held by the Liberal Democrats. The incumbent, Malcolm Bruce, is stepping down, so that should be mentioned here. However, surely the grand narrative for the Scottish National Party in regards to the 2015 Westminster election is that party sweeping aside Labour to become to the new dominant force in Scottish politics at all levels. Their great former leader, the grand poobah of the Nationalist movement, taking a seat off a Lib Dem newbie doesn’t really fit with that.

Salmond should have tried to claim a Labour scalp, without question. For a start, it would have sent out the message the Nationalists need to be heard: Labour, we’re coming to get you. If he’d tried to stand against Jim Murphy or something, I’d at least have admired his bravery. Instead, he seems to have gone for a soft option that isn’t even actually all that soft. In fact, given all the factors, I wouldn’t at all be surprised to see the SNP get a score of seats in May of 2015 – but for Gordon to remain Lib Dem. Christine Jardine is a strong candidate, and the Liberal Democrat line there is clear: the SNP only care about their central belt heartlands. Strangely, having Salmond to run against may help the Lib Dems retain a seat they might otherwise have lost, as they can galvanise the anti-Salmond vote there.

I suppose the important question is whether or not Salmond’s poor choice of seat will have a detrimental effect on the SNP’s Westminster chances in a few months’ time. Whether the paucity of ambition displayed by their former leader will translate into a more timid approach than the post-Indy referendum would have suggested. For what it’s worth, I don’t think so. I still foresee the SNP taking a lot of seats off of Labour (and the Lib Dems, frankly), possibly even more than twenty. However, I don’t think Gordon will be amongst their spoils.

Leave a Reply to Top of the Blogs: The Lib Dem Golden Dozen #402 Cancel reply