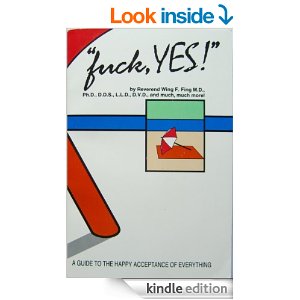 At some point in my early twenties, I was at an extremely dull party. That’s an essential part of being in your early twenties, at least that was my experience of it, attending boring parties. Mostly because you haven’t figured out what’s what quite yet and can’t discern the shit from the shinola. Or at least, you’re so desperate for booze and the off chance you might get laid that you’ll go anywhere.

I did what I often did at these affairs – I scanned the bookshelves for anything readable. Almost always this search was fruitless, but on this occasion my eyes fixed upon a title one could hardly scroll past without a second look. It was called Fuck Yes! Its author was supposedly one Wing Fu Fing.

It is setup like a self-help book (its subtitle is “A Guide to the Happy Acceptance of Everything”) and once you read the first couple pages it becomes apparent that the book is a parody of said literary genre. It starts with a foreword by someone named Bruno Megasavitch, who introduces himself as a disciple of this Mr Fing (Bruno calls him ‘Master”). The foreword is brief but very plot heavy: we learn that Fing is a guru of some kind; that Bruno is gay and is in love with Master Fing; that Mr Fing is now “gone”; and finally that the book he has just penned the introduction for, Bruno himself has yet to read as the publishers won’t let him.

This is followed by two other forewords, one written by Norleen Winkowski, who appears to be a woman Fing slept with once who says “I’ve already told the police all I could”, the other foreword written by Mrs Astoria Wing – Wing’s ex-wife.

While giving us cod philosophy, the book unfolds Fing’s story: he was a guy named Norris, living in southern California in the early 1980’s, when one day he had an epiphany. Tired of trying to fight the world all of the time, he decides to give in to it, fully and completely. He vows to say “Yes” to every binary question that comes his way. His son, who does not have a great driving record, asks to borrow the car. Norris simply says “Yes”. When his son seems freaked out about this, Norris explains his motivations. This freaks his son out to such a great extent, he ends up declining his father’s offer.

The next day Norris takes a bus to Laguna Beach on a random whim where a series of incidents, all leading from his newfound philosophy of saying yes to everything, leads him into mortal peril. He is saved by the Bruno of the first foreword, who turns out to be some sort of abnormal giant of around eight or nine feet tall. Norris has just used a magnificent speech of pure bullshit, one that inspired Boris to save him, so when the giant asks him what his name is he realises he can’t just say Norris; he comes up with Wing Fu Fing on the spur of the moment.

At the party where I discovered this very obscure gem, I sat and read the whole thing cover to cover, which took about three hours. I have a desire to tell you everything about the novel, but that would be unfair. Needless to say Master Fing gets into all sorts of problems, driven by his newfound philosophy. After explaining “Yes” to us, he explains what he says is the opposite of “Yes”, which it turns out isn’t “No” but rather “Fuck”. There is a whole section of the novel dedicated to what “Fuck” actually means (something to do with it being a combination word). I feel like saying any more would simply ruin it for you. Search it out for yourself. It even has a really sad, heart wrenching ending that gives it extra weight.

Only finding it may be tricky. It really is that obscure. I recall going to a bookstore in New York, one of those Soho/East Village bookstores that prides itself on having every book in the world, or the very least the ability to get their hands on a copy of everything ever published. The guy at the desk just shook his head when I brought it up, and in retrospect I think he thought I was making it all up just to intentionally stump him. I’ve heard all sorts of rumours about the book over the years, my favourite being that it was written by Tom Robbins under a pseudonym. I have no idea if this is true, but it doesn’t read like any of Robbins’ work in any way, so that would be strange.

I eventually got my hands on a copy on Ebay a few years back, a beat-up old copy from the 80’s (I’m pretty sure the book only had one printing). Most obscure literature isn’t very good. Fuck Yes! bucks the trend. If you find it, you’re a very lucky person (although in prep for this article, I have discovered that it’s out on Kindle. The joys of modern technology). I’ve poured through most of the great titles in the history of literature, and I still think it’s one of the greatest books ever written.