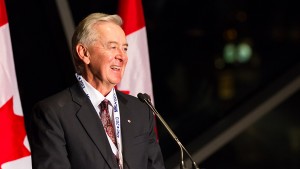 In the wake of Farage’s decision not to stand himself in the impending Newark by-election, the nation of Canada has been evoked by UKIP once more. In an article in the Telegraph by Chris Hope, it is said that the lesson of Deborah Grey, a schoolteacher from Beaver River, Alberta, was instructive in helping Nigel to pass over the chance to enter the House of Commons. To understand why lessons from Canada are so important to Farage, one has to understand his “Canadian Model” and what it means. And, more importantly, why it will never, ever work in the UK.

Going into the 1993 general election, the Canadian Conservatives were in power. But they were a fading force. Brian Mulroney, the Tory Prime Minister, had resigned in semi-disgrace a few months prior to the election and his replacement, Canada’s first (and only to date) female PM, Kim Campbell, had not proved popular. The Tories expected to lose. But they did not expect to lose quite as badly as they did: they went from 156 seats (out of 295) to a mere 2. The reason they got decimated was partly down to the rise of competition on the right, a party calling itself Reform. That nascent party went from one seat to 52, becoming a national force. They only missed out on being the official opposition by two seats.

The one seat Reform held prior to the 1993 election was the aforementioned Deborah Grey’s seat, won in a by-election in 1989. So the parallels with Farage’s situation become clear: Preston Manning, the Reform leader, could have stood in the Beaver River by-election but chose not to, instead fielding a local candidate. The victory of Ms Grey represented Reform’s breakthrough, an event which led to the taking of all those Tory seats four years later.

There are more parallels between the Reform-Tory situation in Canada in the early 1990’s and the present UKIP-Tory one in the UK. The Tories in Canada had become more centrist over the years, giving Reform space to roam on the right. Many right wing Canadians felt the Tories had taken them for granted and were looking for someone credible to vote for instead; Preston Manning was this creature. Reform effectively replaced the Tories as the main centre-right party in Canada, which is clearly what Nigel Farage hopes to achieve.

But there are many more differences as well, most of them decisive in terms of whether or not UKIP could ever make the same sort of move. The most key of them is geography’s role in Reform’s growth. Reform was a mostly western Canada based beast, which preyed on growing anti-Ontario/Quebec feeling in the west. By the late 1980’s, the west of Canada was producing a huge amount of Canada’s material wealth, not to mention exportable natural resources, and many western Canadians, particularly those on the right, felt that the region was being exploited. Manning and his troops were able to use these feelings of being taken for granted to become a massive force in the west (46 of the 52 seats Reform gained in 1993 were in British Columbia and Alberta, where the Tories lost every seat they previously held. Reform only got one seat east of Manitoba).

Under First Past the Post, used by both Canada and the UK at general elections, Reform were able to concentrate on wiping out the Tories in one part of the country where they were most vulnerable. By contrast, UKIP’s support in Britain is fairly evenly spread across Britain and there is nowhere they can dominate enough to gain one seat, never mind a plethora. They are aiming a lot of their guns at the north at present, but watching the way they go about this shows how impossible a Reform-like breakthrough will be for them to achieve. The 2010 UKIP manifesto was far, far right on economic policy, containing things like flat tax; UKIP knows this will be unpopular in the poorer parts of the north and so Farage attempts to water this down, essentially disowning his own 2010 manifesto. Reform never had to do this – the pitch they started with was perfect and never had to be radically altered because they were simply filling a gap in the west that was waiting to be filled.

So could the Newark by-election be the start of something big for UKIP? No, it won’t be. Because they are very, very unlikely to win the seat (Farage didn’t stand because he’s well aware of this, allusions to Deborah Grey aside). And even if they did, they’d lose it again in 2015. The “Canadian model” simply will not work in Great Britain.