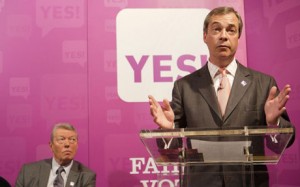 I worked on the Yes to AV campaign as the Treasurer, all round money guy and person who kept everyone out of prison. And I know, more than anyone really, that the actual name of the campaign was not Yes to AV, but I am not for the life of me about to write Votes and Fairer in a certain order anytime soon. Anyhow, I have a book coming out on my experiences during this part of my life (early plug) and in said book I detail how hard it was to control the narrative. Mostly because the press decided, very early on, to treat the whole thing as a joke; somewhat because it is much easier to run a No campaign as opposed to one that advocates change; but mostly it was because we had a lot of crazy people swimming around the margins of the campaign who would do and say insane things that would get picked up by the media. Near the end, we had so many there seemed to be a new person we needed to disavow every single day.

But here’s the thing: we brought it all on ourselves, just as UKIP have done during their current EP elections campaign. We set the whole thing up as an anti-politics, fuck-the-man style battle, and when you do this you tend to attract a massive army of followers who are put out by society in general. We were soon burdened with a huge amount of nutters we were completely unable to control. UKIP have done the same with their immigrant bashing, populist, in-your-face messaging. They openly courted the BNP vote. So it can come to no surprise to them that what they have ended up with, across the country, is candidates and activists who are a few buns short of a baker’s dozen.

During this past week, UKIP had to distance themselves from two candidates on the same day. First up was Geoffrey Clark, who was standing for Kent County Council. What did he say that got him national coverage and subsequent suspension from the ranks of UKIP? Only that there should be compulsory abortion mandated for foetuses diagnosed with Down’s syndrome or spina bifida. How charming. Their second crisis of the day landed a few hours later, when James Elgar, a young man running in Runnymeade Borough Council, tweeted about Asian boys that they: “groom and rape underage white girls, stab and rob innocent old white people, bomb innocent white people”.

I’ll close with this warning to UKIPers: remember how it all turned out for those of us campaigning for a Yes vote in the AV referendum. UKIP may win the EP elections; they may not. It really makes no difference, ultimately. They have destroyed themselves for 2015 by going down the road they have chosen. This was their one chance to make it into the mainstream, and they blew it.