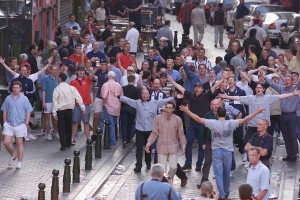 First to the really big news: Spain is out of the World Cup after only two matches played. Seven days into the tournament, no less. Already my prediction for the whole shebang is in tatters – I had Spain going out to Argentina in the semis. It should also be noted that they are the first defending World Cup Champions to ever be the first team out. Talk about precedents you don’t particularly want to be setting.

So how did this happen? How did a team, who in 2008 looked unstoppable, become so terrible? Because it wasn’t just bad luck – Spain were truly awful in the two matches in question. At one point late in the Chile match Cazorla, who plays for Arsenal, simply fell over the ball in a sort of pub team after a few lagers kind of way. It was actually embarrassing to watch them get so completely demolished by a decent yet workman like side on Tuesday, and that is from a neutral perspective. It seems the answer as to why boils down to what it usually is in football: time. The golden boys are getting on a bit, and their replacements are not quite so auric. Sad, but it is within the cyclical nature of sport. This World Cup just came at the wrong time for them.

I rather tragically predicted in my last WC roundup that England were going to win 1-0 against Uruguay. Now, I promise this is not backpedalling, but even when I wrote that I didn’t really believe it. But I simply couldn’t bring myself to forecast an England loss, one that put our fair nation essentially out in the first round. So in an act of wilful naivety, I plumped for a narrow England win.

What was obvious throughout was that we were all watching two fairly mediocre, by international standards anyhow, football sides playing a fairly turgid match. There was one brilliant player on the pitch – Suarez – and he changed the whole game. It’s pretty much that simple.  What’s interesting to me was how different this feels to the last time England slumped out this early in a tournament, namely Euro 2000. The tournament was notable from an England perspective for three things: one, England managed to beat Germany at a major tournament for once; two, England were looking to get to the end of a 2-2 draw with Romania that would have put us through, only to suffer Phil Neville scything down Moldavan in what remains the most obviously correct penalty decision in the history of association football; and three, this was the last time England really had to face the ignominy of its male citizenry running rampant on the continent, the hooligans on the loose. It was even called “The English Problem” at the time.

In Charleroi, where England v Germany took place, it got really ugly. There were Nazi salutes traded either side. One particularly lasting image was one man who’d been deported from Belgium after the violence who was pictured with the words “Pussy Hunter” tattooed across his fat belly. National soul searching ensued, not just about the hoolies but also about how terrible England had been football-wise at what was otherwise a terrific tournament.

This time there’s none of that. It’s worth looking at post-Euro 2000 and how we got to where we are now. Keegan quit shortly after the Belgium-Netherland Euros (stating memorably and in true KK style, “Kevin Keegan is just a little bit short for this job.”). England hired their first ever foreign manager, the charisma vacuum that is Sven Goran-Ericksson. England qualified for the 2002 World Cup by beating Germany again, this time 5-1. Got to the quarters in 2002 and 2006 World Cups and the 2004 Euros, all in matches that could have gone a different way. People started to think that we had a bunch of world beaters and that it was the Swede who was holding us back. So England went native again and found out how tough it was out there: England failed to qualify for Euro 2008 at all. England went foreign again and then came, what I think, for now, was the breaking point – the second round match against Germany in South Africa in the 2010 World Cup. The Germans destroyed England, and the nature of the defeat was much worse than anything seen at a tournament since Euro 2000. But at least after Euro 2000 there seemed to be answers or at least new ways of trying things. Ten years later here we were, noted Italian manager in charge, and England were still rubbish. I think the nation has yet to fully recover its football swagger since. And that’s why England losing to Uruguay was both expected to some degree and not the end of the world when it happened.

England almost certainly won’t sack Hodgson. Why bother? It would seem such a mean thing to do to a nice guy who’s getting close to pension age anyhow. Everyone knows the problem isn’t the manager, it’s the players. Nothing that the FA have done over the past decade has stopped the decline of home grown footballers being of international calibre. Not St George’s Park, not the taking up of different training methods, nothing. I don’t know what the answer is. But the time to start thinking long term and stop looking for quick fixes is now. And let’s stick with Hodgson. He’s the right man for right now, mostly because who the hell else would want the job?