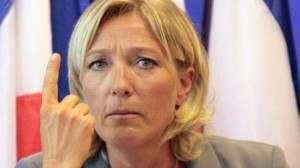 For a brief moment, it looked like UKIP could be wooed by Marine Le Pen into joining the National Front in a new, explicitly anti-EU far right grouping in the European Parliament. Currently, both UKIP and the National Front sit in the Non-Inscrits “group”. I put that in quotations as it is not a grouping as such; it is technically a place for any party that finds itself in the EP and doesn’t find any natural allies. But it has become a reservoir of far right parties.

But this collaboration isn’t going to happen. It was only three days ago that Marine Le Pen reached across the Channel in a bid to get UKIP and the National Front to work closer together in Brussels. “My arms will be open as long as it’s in the interests of the European people for us to join together in a common project to fight the European Union,” she said. Perhaps Le Pen has had a think and decided that it isn’t in the interests of the European people for UKIP and the National Front to work together (this would be one of the first times I’ve ever agreed with her on something then), because she’s completely changed her tune now. “He is often reproached for the behaviour and comments of a certain number of his party members,” she said in an interview with the Sunday Times. So it looks like the dream ticket of right wing nutjobs spread across two great nations has been dashed already.

The real reason for this is that although it would make a great deal of tactical sense for the far right, anti-EU parties to join forces in the European Parliament to try and bring the whole thing down, they never seem able to do it. This is because different far right parties, particularly from separate countries, find it almost impossible to work together on anything. The reasons are pretty straightforward. First and foremost, far right parties tend to be nationalist. This makes it pretty hard to be seen to be working with a bunch of foreigners. UKIP believes in British exceptionalism and the National Front in the innate superiority of the French. These two equations are mutually exclusive. There is, connected to this, a problem with terrain as well – all of these parties want to destroy the European Union, so working together within it presents an immediate problem.

Also, the far right runs on bluster and scaremongering; this does not lend itself well to calm pragmatism. So we see things like the Farage-Le Pen dalliance of this week; a bit of mild flirtation followed by furniture throwing. It was ever thus.

So the only chance the far right has to do continent-wide damage is thwarted by the potential antagonists themselves. Even nationalist parties have their upsides then.