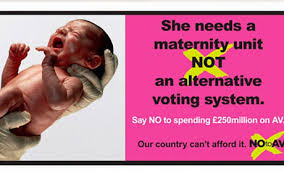 In the way that members of a certain generation remember exactly where they were when they first heard that John F Kennedy had been shot, those who either worked or volunteered on, or were in any way emotionally involved with the Yes to AV campaign will never forget the circumstances under which any of us first saw what was to become the defining image of the AV referendum campaign, the sick baby billboard. For those of you who don’t remember it as clearly as we do, it was an advert put out all over the country by No to AV that featured an ill looking new-born infant, tubes galore attached to its tiny frame, being cradled by two latex covered hands with the accompanying legend:

“She needs a new maternity unit not an alternative voting system. Say no to spending £250 million on AV. Our country can’t afford it.”

As for my maiden viewing, I was sitting in one of the upstairs offices, the ones we had resorted to when the purported “play area” we’d been promised had failed to materialise (we were supposed to gain access to a table tennis board and some other delights. Looking back on it, it’s probably a good thing this offer was reneged upon). The Deputy Campaign Director walked in with a printout of a picture someone had taken of one of the London billboards in hand.

“This is it,” he said as he laid it on the table in front of me. “We’re royally fucked.”

I’ll admit to my first thought upon viewing this object: what a stroke of genius. We all knew they’d go after cost eventually (it’s one of the C’s in the “CCF” of how to run a classic “No” campaign: cost, complexity, fear) but putting a sickly infant in the picture, literally, was brilliant. It was right out of Bill Hicks and his Saddam Hussein routine, the one where the image of a dead foetus riles a whole nation to a blood curdling pitch. It was a world away from the amateur hour inflatable pinstriped arses or the student politics, let-us-burn-our-MPs-in-effigy rubbish that our campaign had come up with to that point.

It was done at the exact right time too, mid-February 2011, just as public discussion around the referendum was truly getting started (as much as it ever would at least). It set the tone for the rest of the whole campaign, something any armchair political strategist will tell you is what you’d be aiming for with something like the sick baby billboard. It was a best-case scenario for No to AV. I’ve heard that it was Dan Hodges’ brainchild. If so, I would say that if there’s ever a referendum campaign I want to win in future, the Daily Telegraph journo would be amongst the first people I would get in contact with and try and convince to jump on board.

The Yes campaign made the whole situation created by the sick baby billboard much worse by reacting very, very badly to it. Paul tried to keep the situation in check, telling everyone to sit tight and not say anything about it, but with anarchy the system of government on the campaign there was little he could do to stop the deluge of stupidity written by people attached to the campaign from flooding forth. Every left of centre blog outlet went mental on the baby advert, calling it a travesty of democracy and a further sign of the approaching end of the world. This deluge had two large effects on the AV campaign:

1). It gave the £250 million figure more airtime, thus cementing it in the public’s mind, surely the very aim of the billboard in the first place and;

2). It mortared the idea that the Yes campaign was in essence a vehicle for disgruntled left wing politics, further alienating those on the right who might not at least have hated us at the time, as well as those in the centre who were looking for a steer on the issue.

The narrative of a “permanent progressive majority” gained more ground, inside and outside of the campaign, following the billboard’s release. Which may have been, in the end, its greatest triumph.

The sick baby billboard exposed another important thing to remember for anyone involved in a referendum campaign in future to bear in mind: short of libelling a particular individual, you can essentially say anything you like in a political advert in the UK. You can lie with complete impunity and there is no one who can stop you. When we queried the billboard, and particularly the £250 million figure with them, the ASA said they didn’t have any authority over political advertising, that it was free from their remit. Meanwhile, the Electoral Commission said it wasn’t under their aegis either; that television ads are the domain of the ASA. So essentially, this means that political advertising is completely unregulated in this country as it falls between the cracks. This will give an advantage right off the bat to any campaign backing the status quo in a referendum situation in future (anti-EUers thinking it will be a piece of piss to get Britain to vote for a Brexit take note of this now).

You can just say, “This change will cost the country 10 million jobs”. Or 5 million or 15 million – whatever you think the public will find plausible is your only guideline. Fib with indemnity. And watch as the opposition either sit on their hands and hope the story dies or run to the media to talk about the incorrect nature of the figures, thereby soldering them into the public’s conscience. Either way, the status quo wins.

A final note on the sick baby billboard: a member of our team took it upon himself to find out who the baby in the picture actually was and if he/she had made it through all of the tube related palaver unscathed in the end. She was discovered alive and well, in the same place she had been born, which happens to be in a small town in Arizona. Five years of age, and with no long-term health problems to speak of. God bless America, its First Past the Post voting system, and its complete lack of a health service.