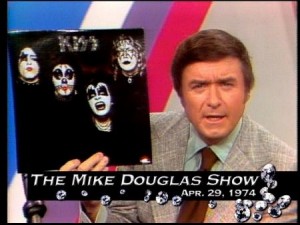 This article is one that contains almost 2,000 words on the admittedly execrable 1970’s hard rock phenomenon from New York known as Kiss, so those who normally tune in for my finely honed snapshots of Westminster should look away now. I apologise in advance for my lack of brevity; I just started writing on the topic and sort of got carried away. I suppose the thing about Kiss is, they were my favourite band when I was eleven years old; this is the sort of thing that tends to linger in your psyche, whether you like it or not. Anyhow, to the uninitiated in particular I shall try to explain the significance of Kiss’ appearance on the Mike Douglas Show, containing the first interview with any of the group’s members on US national television, which occurred on April 29, 1974. Today marks the 40th anniversary of this legendary event.

The Mike Douglas Show was a variety programme in the vein of the Tonight Show or David Letterman, albeit the Douglas Show was a much more budget, homely and Midwestern (it was shot in Cleveland) version of this mould. On the 29th of April, 1974, Douglas returns from a commercial break to introduce the fact that a rock group called Kiss is going to come on and play some songs – but first he’ll meet one of the members of the group, Gene Simmons (he’s the bass player and the one with the tongue). Simmons then enters the cheesy, boxy set in full demon regalia and begins to pose like a stoned teenager. Bear in mind, Kiss were almost totally obscure at this stage, so the studio audience would have had no idea who this strange creature was. And what was 1970’s Midwestern America’s response? Mostly light laughter, as Simmons sticks his soon to be famous glossus out at the audience while dressed in a Halloween costume. He then blows the whole persona before even saying a word by very politely shaking hands with the other guests, notably a very unimpressed Tottie Fields, whom Simmons then sits down beside.

Gene is very clearly, even under all of the makeup, shitting himself. Douglas starts in on the routine questions: how many members of Kiss are there, where are you guys from, that kind of thing. Simmons leans over to Douglas and says, “You know, your audience really looks appetising.” This is Simmons’ clearly desperate ploy to try and fight through the jitters and stay in character. Douglas throws the ridiculously attired bass player a bone. “Are you a bat?” he asks. Simmons sees his opening and takes it.

“What I am is evil incarnate. So some of those cheeks and necks look really good.”

Simmons then sticks out his tongue again. The studio audience erupts with laughter, clearly not the reaction Simmons was after. Gene then tries to interact with Tottie Fields, who thus far has rolled her eyes at the whole routine. She hits Simmons in the solar plexus with the line:

“Wouldn’t it be funny if underneath this he was just a nice Jewish boy?”

It’s a question Simmons cannot stay straight-faced in front of. It all then gets worse for Gene as the host then announces he is about to bring out the winners of some sort of national kissing contest. Out pop two very 1970’s looking people in promotional T-Shirts. As they approach the set, Gene hugs them both and says “You’re my people!” How this is supposed to convey evil incarnate is unknown outside the boundaries of 1974. Simmons then unconsciously separates the poor couple, who managed to keep their lips together for one hundred hours or something equally implausible. What love could not tear asunder, Gene Simmons could. Perhaps this is where the evil incarnate stuff comes into play.

This, it is then revealed, is all part of some Kiss related contest (the kissing couple’s prize was tickets to a Kiss concert). Simmons then has to explain all this like some cheap concert promoter, which demystifies the guy even further. Despite this, Simmons keeps trying to look quasi-evil every time the couple are speaking, making ridiculous faces and giving his papillae some more air time.

After another pause for the sponsors benefit, Kiss come out on stage and perform a song entitled “Firehouse”, which is about calling out the fire department so that they can hose down a guy who has got an erection due to exposure to an unspecified yet clearly attractive girl (this is commonplace in America, I guess), a song that contains the immortal lyric: “And the quicker, you get thicker, she’ll remove your education”. Light applause from the bemused Cleveland audience. And then out.

Kiss were, at the time, promoting their first LP, entitled, very creatively, Kiss. Around this time, the band was playing what was to be their best ever song, a mostly instrumental, quasi-prog piece called “Acrobat”. It’s is actually genuinely memorable and even, dare I say it, somewhat funky. Small problem though – it’s not on Kiss nor indeed on any subsequent LP release (a really low audio standard live version came out on a box set a few years back). Somehow, it didn’t make the cut. Shocking, as “Nothin’ to Lose”, a terrible 1950’s sort of number about anal sex (I swear I’m not making that up), made it on, as did the retarded “Strutter” and the aforementioned “Firehouse”. The only good songs on the first Kiss album are “Let Me Know”, which has a sort of “Acrobat”-esque funky ending, and “Love Theme From Kiss”, which is just the intro from “Acrobat”. So no surprise really that the album sunk like a stone.

Casablanca, the mostly disco label that had signed Kiss, duly panicked and forced the band to record another album straight away. This they named Hotter Than Hell and the pattern of Kiss not being the best judges of their own material became hardened. The album contains three bona fide classics: “Goin’ Blind”, which not only has the best lyrics of any Kiss song ever (that’s not much of an accolade, I do understand), but the best guitar solo contained within any Kiss number as well. It’s slow and moody, with a particularly good bass line. “Strange Ways”, which is weird and dark, is also great; “Parasite”, a song that contains that rarest of things within the Kiss canon – a memorable, catchy guitar riff. Ace Frehley wrote the latter two songs mentioned there, which I don’t think is coincidental.

These songs were buried and never heard from again, at least until they were covered by indie bands in the 90’s (The Melvins did a great cover of “Goin Blind”. The Kiss original is actually better though, implausible as that might sound). Instead Kiss chose to play two numbers off the album for the rest of their days and enshrine them in Kisstory. Firstly the horrendous title track, which is easily one of the fifty worst hard rock tunes of all time. “Hotter Than Hell” basically takes the concept of “Firehouse” and makes it even more stupid, something that surely would have previously been considered impossible. Secondly, “Let Me Go, Rock and Roll”. Do you remember being a very small child, like two and a half, three years of age, and you heard rock songs on the radio and wanted to come up with one of your very own? So you’d improvise with a very basic tune, which was mostly just shouting sans melody at the top of your lungs, and thinking of any old lyrics that came to mind, usually just “rock and roll” over and over again? Well, if your three year old came up with “Let Me Go, Rock and Roll” off the top of its head, you’d start seriously worrying about their mental development. The only other numbers Kiss ever played live off the album were the instantly forgettable “Watchin’ You” and the truly horrendous “Got To Choose”, a song which sounds like something a rather unimaginative and highly musically untalented teenaged boy would come up with while drunk.

But hey, ultimately what do I know, given the fact that Kiss soon became one of the world’s most massive rock groups. They even made a bad TV movie in 1978, Kiss Meets the Phantom of the Park, which is one of the worst movies ever made (if you count TV movies as movies, that is). It is about a sacked employee of an amusement park who decides to kidnap Kiss, rob them of their superhero powers (Kiss have superpowers in the movie. Simmons breathes fire, speaks with reverb and has super strength; Paul Stanley can listen in on conversations happening miles away from where he’s standing; Ace Frehley can teleport himself and the group from anywhere to anywhere (why give Ace the best power?); and Peter Criss can talk like a Hanna-Barbera character). The crazed employee actually succeeds briefly in imprisoning Kiss and putting in their place a faux, robotic version of the band that goes ahead with their planned concert. Only the maniac who has kidnapped Kiss changes all of their lyrics in order to foment Marxist revolution. “Hotter than Hell” is changed to “Rip and Destroy”. Sample lyric: “It’s time for everyone to listen good/We’re taking all we can stand/You’ve got the power to rip down these walls/ It’s in the palm of your hand.” It is redundant to add that these are easily the best lyrics to have ever emerged from Paul Stanley’s lipstick laden gob.

Following the TV movie’s disastrous reception, Kiss went down the only road they probably felt was available to them at the time: they went disco. While not changing their image in the slightest, Gene Simmons continuing to barf blood incongruously over top of wimpy dance floor non-hits. Then they tried to be Pink Floyd for one album, a truly monstrous concept piece entitled “The Elder”. Then they went all Judas Priest to court the heavy metal kids, soon taking off the makeup as well. This worked for some reason, and the fan base mysteriously returned. Until they got bored too and then Kiss put the makeup back on again and did a tour in which they pretended it was 1977. Which was great, by the way. I saw them in 1996 in Las Vegas. It was the best concert I’ve ever been to.

So why does Kiss matter enough for me to write this lengthy jeremiad on them? One in which I’ve spent most of my time talking about how shitty their music is? I suppose because of what they represent to me, which is the triumph of chutzpah above everything else, including style and substance. And having a serviceable rhythm section. What I like about them is best seen in the classic Penelope Spheeris film “The Decline of Western Civilisation, Part II: The Metal Years”. When the filmmaker asks all of the rock stars at the end what advice they would give young aspirants on the music scene, all of them give cynical, patronising remarks. Other than Paul Stanley, who says that he made it, so who is he to tell anyone what they can and can’t do. Just go for it, if you think you’ve got what it takes. I think it’s this all-American optimism, dressed up in kabuki face paint, which keeps me coming back. To thinking about Kiss, if not listening to them ever again.