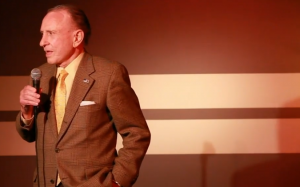 New York City, sometime in the late 1990’s. Pre-9/11 and all of that. What I’m doing in the Big Apple would take a whole other story – let’s just say I’m there. Staying in a little place just off Bleecker Street, Greenwich Village.

Some friends of friends knock on my door one evening, out of the blue.

“It’s this stand-up comedian. You have to see this cat to believe him,” said a guy wearing a black onesie.

This is the way Village hipsters in NYC talked in those days. I thought about it for half a second and figured a little comedy was what my life needed at that moment. So I decide to tag along.

The bar was further away than I had anticipated; all the way over past Alphabet Street, almost on the Lower East Side, although a real estate agent of the period would have described it as “East Village borders” and gotten away with it. It took almost twenty minutes to walk there. It was late October and I recall wishing I’d worn my winter coat.

The comedy bar was crammed full of folks. Most of them looked like students, but there were a few notable exceptions: a table full of what appeared to be Arabic men, all of whom looked liked they had just crawled out of the Empty Quarter given their attire and general state; a table full of old ladies who appeared to have been bused in from Yonkers; and a group of chaps who were very well dressed Italian men who looked like they could be involved at high levels of Trade Unionism, if you get what I’m attempting to imply here.

As my group took our seats, I then noticed the stage: the front of it was covered, ceiling to floor by a plate of see through plexi-glass, as if the stage were an oversized fish tank. Almost as soon as we sat down, as though the owners of the establishment had been holding off specifically for our arrival, the lights went down and onto the stage bounded a short, balding man wearing a DJ and bow tie, under the glow of a newly activated spotlight, the radiance piercing the plexi-glass creating a bizarre effect that is difficult to describe in words.

“Welcome to the Perilous Punch Line, the comedy club where more than just the bread sticks are stale!”

He paused for a laugh that never came.

“Tonight we sure do have a real treat for you. Would you please welcome to the stage the legend of the ludicrous, the knave of nonsense, the master of mediocrity: give it up for the one, the lonely, Aadiat White Man!”

The MC departed, replaced instantaneously by a short, fat, Semitic looking gentleman wearing almost exactly the same outfit as the bloke he’d just switched places with. Behind him, a young black guy holding a pair of drumsticks took his seat behind a drum set I hadn’t previously noticed at the very back of the stage. Once his drummer appeared ready to go, the person I can only assume to be the aforementioned Aadiat White Man grabbed the microphone off its stand and began his routine.

“I tell ya, you people seen that 70’s flick, “The Towering Inferno”? Every time I watch that thing it reminds me of my girlfriend’s penis, you know what I mean?”

The drummer kid did one of those “comedy” drum rolls, you know the kind of thing you get when it’s supposed to indicate that you’re supposed to laugh. Except, of course, that no one in the whole place so much as lightly giggled. Apart from me, I shamefully disclose here and now.

You see, I have this thing about really bad comedy – it makes me laugh uncontrollably. To give you some idea, the hardest I’ve ever laughed in my entire life was when David Brent gives his terrible stand up routine to the Swindon lot in The Office. So it has to be really, really, really bad comedy to tickle my funny bone, but once it hits it I’m out of control, tears of laughter almost drowning me.

So as several people turned to stare at me as if I was a maniac, Aadiat White Man told his second gag of the evening.

“Knew this guy – said all his r’s as b’s. So like, let’s bock and boll, you dig me? So yeah, this guy one day walks into a bar and says to the serving lady, “Can I have a glass of rum?” And this girl brings him a cup of shit.”

Another comedy drum roll. Again, no laughs, other than from myself. I was by this stage almost apoplectic with amusement. But around me it started to get a little ugly. A few people in the crowd began booing. Then, one of the Arabs got up from his seat all of a sudden and made a mad dash towards the stage. Out of his desert garments he yanked a Kalashnikov. He then shouted something in what I took to be Arabic. After this exhortation, he began to fire his rifle at Aadiat White Man and it was then that I finally understood what the plexi-glass was for: it appeared to be bulletproof. Aadiat White Man just stood there smiling through all of this, completely unphased, while the transparent barrier in front of him absorbed the lead coming his way.

Out of ammo, the would-be assailant was then tapped politely on the shoulder by a large man in a DJ and bow tie, exactly like a larger version of the MC and the comedian, whom I assumed to be the bouncer. The Arab looked at the bouncer resignedly and then followed him out of a side door to the club, into the street. His identically dressed friends still sat at the table got up at this point and left as well, they through the actual front entrance to the club.

“He just got the check,” Aadiat said, his timing impeccably awful. I had calmed down a little after the shooting began, the sudden sound of gunfire sobering my mood. But this ill-timed line had me off and running again.

“My real problem isn’t guys with machine guns. It’s dames. My wife she gets upset at my behaviour, you know? My philandering nature. Like the other night I was having a few drinks with a good friend of mine. Anyway it’s getting late and I tell him, look, I gotta go, wife’s gonna kill me. He’s says “what you kidding me?” and I tell him “look, I shoulda been home during the caveman days”.

Following the de rigueur drum roll, you could hear a pin drop. For even I had stopped laughing due to the fact that there was now what appeared to be a man dressed as a ninja descending from the ceiling on a thin wire – behind the bulletproof glass. Shortly after I spotted him, he landed on stage, whereupon he removed a long sword from his clothing. The ninja then crept up towards Aadiat White Man, behind the comic, with what seemed to be the intention of stabbing him with the weapon.

By this stage I had worked up an affection for the terrible comic and so I yelled out “No!” But just before the would be stab artist has a chance to do his thing, a gigantic cane emerged from the side of the stage, the person holding it unseen, and yanked the ninja off stage promptly, like something out of a vaudeville routine.

One final “comedy” drum roll. No response from the crowd whatsoever. I found myself wondering if the guy with the rifle and the ninja/cane routine were just parts of the act. Given the circumstantial evidence, it seemed likely to me at the time.

Aadiat White Man exited stage right after this closing salutation. That done, the drummer kid ran out from behind the drum set and did an impromptu dance routine that went on for two minutes. Sans music.

It is, beyond a shadow of a doubt, the single greatest piece of entertainment I have ever been witness to.

I had to wait almost forty-five minutes for Aadiat White Man to emerge from out of the exit door behind the club, but when he did, I instantly knew it was worth the lonely wait (sufficed to say, the people who I had went to the comedy club with in the first place, the Village hipsters, declined to wait with me and thus participate in my newly found obsessive fandom). He was dressed in a large fur coat that I recall him using to hide his face as much as possible. Behind Aadiat was the drummer, who in the glare of the streetlight looked obviously younger than he had on stage. He was holding a pair of drumsticks in his right hand and had a snare drum and cymbal dangling from his neck on a strap.

“Mr. White Man!” I yelled, and as soon as I did he assumed a defensive karate type posture, while the drummer dropped his sticks, reached into his inside coat pocket and produced a revolver, one he proceeded to point in my direction. I put my hands up in the universal sign of “I come in peace”.

“I’m sorry, I just wanted to say I loved your performance tonight. You’ve made yourself a huge fan tonight.”

Aadiat looked at me, puzzled.

“A fan? I ain’t had one of those things since I went to the tropics and asked for a parasol.”

The drummer kid then scrambled on the ground for the drumsticks he had thrown aside when he went for the pistol. He quickly found them and once he did, tapped out one of his patented “comedy” drum rolls on the snare drum tied around his neck. While still holding the gun, I might add.

We then stood in silence for a full two minutes, none of the three of us standing there on what was an increasingly cold evening in what wasn’t the best part of Manhattan having anything further to say to each other. This period of awkwardness having elapsed, we all went our separate ways. I have never heard any more about Aadiat White Man since despite numerous attempts to find out if he is still working.