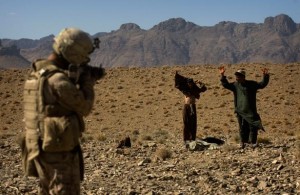 Dan Hodges wrote an article on his Daily Telegraph column earlier in the week about how he felt that the war in Afghanistan had been a worthwhile one, describing it as “mission accomplished”. I feel that his piece is a perfect annunciation of everything that is wrong about this particular train of thought.

I have voiced support for western military intervention in Syria on several occasions, so I do not approach this topic from an anti-liberal interventionist point of view at all. I think we were right to help in Libya, as a for instance. I believe, however, that in Afghanistan we have had two insurmountable problems to contend with: one, we never really knew what the whole thing was about to start with (and never subsequently figured it out); and two, we had bitten off much more than we could ever hope to chew.

Invading Afghanistan was done on the pretence that Osama Bin Laden had masterminded 9/11 on Afghan soil and the Taliban government were hiding him. We were marching in to find the man and break up his little cell. Only it turned out his cell wasn’t that little and wasn’t contained within any one country. And Bin Laden didn’t appear to be in Afghanistan any longer. He was eventually found in Pakistan, many years later. As horrid as the Taliban were in most respects, I do not believe they knew a whole lot about 9/11 prior to the event. They were mostly used by Bin Laden and his people.

Which again, isn’t to say that the Taliban were perfectly lovely people. Dan talks in his article about how without the toppling of the Taliban, the thousands of women who are now allowed to go to school, to teach school even, would not have this as well as many other rights. He’s absolutely correct on this count. But when the last vestiges of western military might exit the stage, what happens to Afghanistan then? It is not hard to see the Taliban retaking the country in our absence. Then what? Invade again and restart the whole process?

Before marching in, western powers gave no real thought to the politics on the ground. Yes, the Taliban were awful, but they had come to power in Afghanistan due to the lawless vacuum that had consumed the country following the Soviet war. The Taliban’s version of sharia law may have been detestable but for most Afghans it was a whole lot better than the warlord, crime-filled anarchy of the country prior to the seizure of power by Mohammed Omar’s theocracy.

The worst consequence of the invasion of Afghanistan and the subsequent Iraqi adventure was the affect it had had on the concept of liberal interventionism itself. Whenever one tries to argue its merits these days, the other side only has to bring up these two conflicts and they have effectively won. The tragic thing about this is that we are now finally in a world where western intervention could do some good, Syria being only the most obvious current example.

For that, if nothing else, Afghanistan was a very costly error indeed. “Mission accomplished” – if only, Mr Hodges.