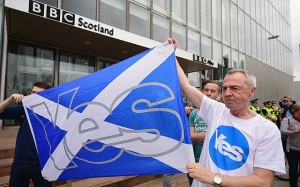 On September 18th, 2014, the Scottish people voted by ten points to reject independence and remain part of the United Kingdom. You would have thought that this would have taken the wind out of the SNP’s sails. After all, independence is their raison d’etre – surely now that the Scots had rejected it, the party would be thrown into existential crisis?

Instead, the exact opposite has taken place. The SNP currently have a whopping 20 point lead over Labour in terms of Westminster voting intention. From the perspective of even a couple of years ago, those numbers would look like science fiction. How did the Scottish National Party achieve this in the face of defeat?

The answers are relevant to David Cameron and his quest to put “The European Question” to bed forever within the ranks of the Conservative Party. Because someone should have passed along to the Prime Minster the following nugget of wisdom: referenda settle the sum total of shit. The losing side never say to themselves, “Well, it seems as if the public disagree with our point of view. That’s democracy for you. I guess we’ll just have to submit to the majority outlook.” No, instead they cry about how they were robbed. About how the other side cheated. They invent conspiracy theories about how the vote was rigged. But most of all, they don’t give up the ghost. In fact, they pursue it even harder.

Just like the SNP are even now calling for another referendum asap, mark my words: an In/Out European referendum wouldn’t kill off UKIP, or indeed Eurosceptism within the Conservative Party. I can imagine it getting immediately stronger, and I can furthermore already hear the kind of stuff that will be trotted out by the Farage squad. Stay In only won because Cameron duped everyone. Big business conspired to protect its interests and lied to us all. If only we had another referendum tomorrow, it would definitely go our way this time. All of this is why we need St Nigel more than ever.

Cameron made the EU referendum pledge in his vaunted Bloomberg speech because he wanted to settle the matter for all time. He thought that just making the pledge publicly would be enough to kill UKIP. We saw how that turned out. Politicians in this country think that national referenda put matters to rest; in reality, they never do. It didn’t work in Scotland, and it won’t work nationwide if we are asked whether we want to stay in the EU or not. The Eurosceptics won’t let democracy sway them from their holy mission, whatever they bleat about the merits of a referendum now.