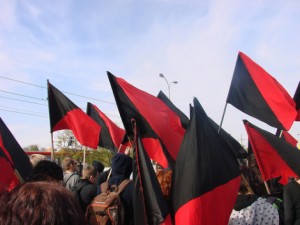 What you are about to read comes from something I wrote for a prospective book on the AV referendum that I’ve decided not to publish. But some bits of it are helpful to those who might think about trying to run a national referendum anytime in the near furture. Or if you just think arcane systems of thought are amusing.

I have a terrible confession to make. When I was a teenager, long before I toured the hinterlands of America playing bass guitar in a forgettable all-girl country and western band, I was a bit of an anarcho-syndicalist. For those unaware of what this political philosophy entails it essentially boils down to being left wing on social issues, sort of libertarian, while being both anti-capitalist and anti-state at the same time. Anti-everything, basically. Left wing yet against any sort of central state having, well, any sort of power at all, even the level of power it would have in your bog standard liberal democracy.

So as an anarcho-syndicalist you believe in the great socialist revolution, where everyone is freed from all forms of tyranny, but it will come not only without a single shot being fired but when it’s achieved it will require no state of any kind whatsoever to keep it going. So a bit Russell Brand, really. Those of you with any sort of active “inner Noam Chomsky” will understand the allure of such a system almost immediately. Anyone with any sort of common sense will recognise it is a political viewpoint that can only ever lead to entirely unworkable policies and solutions, and furthermore that any move towards anarcho-syndicalism by a state would result in a society precisely the opposite of the one its adherents wish to bring about.

I figured this all out long before my seventeenth birthday and moved on with my political ideological framework. Unfortunately, a great deal of the people who worked, volunteered and poured their heart and soul into the Yes to AV campaign were either unconsciously or eyes wide open anarcho-syndicalists. As a result, whatever the Yes to AV campaign might have or have not been good for, it was the best ever long term, large scale testing of anarcho-syndicalism in practice that I have ever heard of. And as someone who was in the middle of it for about a year, I can tell you that as systems of government go (although I suppose the whole point of anarcho-syndicalism is that it is, by definition, not a system of government at all), it is pretty rubbish. Even all that living in co-operatives crap Blue Labour adherents are always going on about looks good by comparison. Because when it comes down to it, and this is a sad thing to learn as you grow up, someone really does have to be in charge if you want something to work. Particularly when it comes to political campaigns. It is the only way to ensure cohesion and that bad ideas get left behind.

But the Yes to AV campaign was tied to the concept of the “people’s campaign” and so we were saddled to a group of folks with pronounced “no one is the boss of me” chips upon their shoulders. This tendency reflected itself in almost everything we did. It was decided that the banners we were to unravel across the country (itself a fairly lousy idea that came from the anarchy wing) were to look intentionally homemade and amateurish. So we had paid staff working round the clock to paint them. When they still did not look as was desired, we had to take them to a design company. As a result, our banners cost almost twice what the No campaign’s banners did (I know this from the published accounts) and yet looked terrible, which was perversely the point of the whole exercise.

This anarchist tendency within the campaign reared its head particularly whenever the No campaign produced something incendiary, which as the short campaign approached only got more frequent. The Comms team ran themselves ragged trying to control what the campaigners were saying on the web during these periods but it turned out to be impossible. Looking back on it, HQ tried to control too much centrally. Local groups should have been left on their own to get on with whatever it was they wanted to do. By hiring Regional Organisers and trying to get them to rally local groups, we got all of the pain with none of the gain. We couldn’t stop them from doing silly things and yet we were tarred with the blame.

To some degree it comes down to the politics of extremes, ironically what the Alternative Vote was supposed to help eliminate from Westminster politics. I’ve always felt that the far left and the far right have more in common with each other than the far left and the centre left do, or indeed the far right and the centre right have. Being on the extremes always involves polemics, wearing your beliefs on your chest as prominently as possible. It is never, ever about compromise – far left and right politics are always utopian in nature, and there are no half way measures necessary in utopia. Whereas both centre left and centre right parties are heavily involved in pragmatic compromise, weighing the options and trying to come out with something that will actually work in reality as opposed to something perfect that could only work in a fantasy version of the world. We had a great deal of extreme leftists working as paid staff on the campaign, sometimes at the very heart of it. People who wanted, in their heart of hearts, to overthrow the system entirely. Why a bunch of far left zealots would actually want preferential voting at all is beyond me given the pluralist nature of it all. But then again, I’ve never really understood bellicism particularly well.

The chaos that enveloped the whole setup was at least amusing sometimes. For instance, we organised a big “stop the BNP” rally on College Green. We managed to talk the BBC into covering it. Almost all of the effort in regards to the rally was put into purchasing and getting onto the site twenty deck chairs that were to be displayed in front of parliament. The visual reference was so weak that as I sit here typing this I have no idea for the life of me what the connection between deck chairs and the British National Party was supposed to be. So much effort was put into the bleeding holiday furniture that we didn’t even bother to organise speakers. Billy Bragg did it on short notice; good on him. And the BBC didn’t use even a single moment of the deck chairs in their footage, so that was several hundred quid and a week’s worth of several members of staff’s time down the tubes. This apathy had an upside however. One of the said staff members said something along the lines of, “I’m so sick of campaigning against the BNP I might just vote for them the next time round” while standing about three feet from a BBC camera that was rolling at the time. Thankfully, the BBC didn’t use that in their footage either. The Lord taketh and he giveth away.