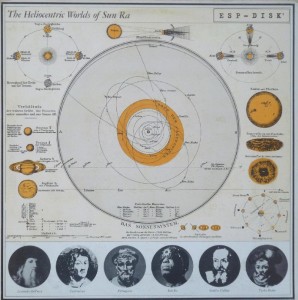 Jazz musicians have a reputation for being weird, outré, strange. Thelonious Monk’s middle name was Sphere; Miles Davis was so infamously difficult to interview because of his tendency to ramble that journos dubbed him the Prince of Darkness. But in the deviation from the norm sweepstakes, the grand prize must go to Sun Ra.

Born Herman Blount in Birmingham, Alabama sometime between 1910 and 1914 (birth records for black people in the south at the time are, as you would imagine, not great), he was nicknamed Sonny. Little is known about his early life, as he would later claim he was not from Earth at all but born on the planet of Saturn. He even, infamously, got his US passport changed to read “Birthplace: Saturn”; the demonstrating of this document was a treasured ritual amongst jazz musicians that Ra both played with and met.

What is known is that he was a World War II conscientious objector, did some prison time for it before finally being declared 4-F on account of a hernia he’d suffered. After the war was over, he traveled to Chicago and found work as a pianist in the city’s then thriving jazz scene. In the early 1950’s, he put together his first Arkestra (meant to sound like “orchestra’ in a deep southern accent), and formed his own recording label, predictably entitled Saturn Records.

Over the course of the next forty years, he made several albums a year. No one is really sure how many there are in total as some are so obscure as to have been lost altogether; estimates put it at between 100 and 150 LPs. His music is incredibly diverse, but falls broadly into these stages: the 50’s, in which bebop, swing and a hard to define x factor is fused into a very listenable stew. Albums like Super-Sonic Jazz and Jazz in Silhouette are amongst his most accessible material. Sun Ra moved his band from Chitown to New York in 1961, and the music very quickly changed, got more experimental. He discovered sound effects by chance during a recording session in 1962 and never looked back; Art Forms of Dimensions Tomorrow, Cosmic Tones for Mental Therapy, and When Angels Speak of Love turn away from trad jazz forms altogether and into a strange mix of minimalism, free jazz and rhythm based stuff that almost presages late 1960’s rock. Then in 1965 he went totally free jazz with his Heliocentric Worlds of Sun Ra albums (part 2 of which has the all time best album cover).

In the 1970’s, he started to get enough exposure to tour outside of the US, and a trip to Egypt seems to have changed him; he started doing vocal music, with political lyrics, a real departure for a jazz pianist whose songs tended to have titles dealing with things like love in outer space previously. “Nuclear War” from 1979 is the classic from this time period (sample lyric: “Talking about nuclear war, it’s a motherfucker, don’t you know, when you push that button, your ass got to go”).

Where to start with someone like Sun Ra if you’re looking to get into him is a toughie, given the plethora of material. I’d start with The Futuristic Sounds of Sun Ra, recorded only a few weeks after Sonny blew into the Big Apple. It foreshadows the weirdness to come without overwhelming a newbie, with the old sound still in the mix.

I sort of love Sun Ra for the same reason I love most of my artistic heroes; his project was one that would have appeared to have been doomed to failure from the very start, yet he stuck with it long enough for its audience to come to him of its own accord. Also, unlike some of the outsiders I have championed, Sun Ra was talented enough to have had choices. He could have made it as a straight jazz pianist in Chicago in the 50’s, but was determined either through vision or some sort of mania (he did think he was literally from another planet, let us not forget), to follow a different, much rockier path. And we, in this digital age of ours, reap the rewards, with a large chunk of his output sitting around on YouTube for all of us to enjoy.