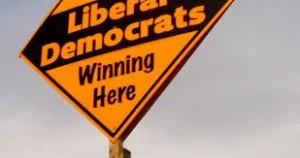 Lord Ashcroft’s latest poll has some interesting findings in regards to Lib Dem marginal seats. First off, let’s look at Lib-Con marginals. There’s some potentially bad news here, with Nick Harvey predicted by the polling to lose his seat – but only by one point, so with swing-back Sir Nick should probably be fine. Portsmouth South meanwhile sees a whopping nine point swing from the Lib Dem to the Tories, so that looks bleak (although never under-estimate the campaigning nous of one Mr Vernon-Jackson).

The rest of the Lib-Con constituencies that Ashcroft polled, nine in all, saw the Lib Dems “well entrenched” as Ashcroft himself put it. Even in Hazel Grove, where Andrew Stunell is stepping down, we see the party currently with a solid six point lead.

But the really good news is to be found in Lib-Lab marginals. Not because of this one poll in particular, but because of the trend of polls in these type of seats over the last few years. Essentially, the Lib Dem vote isn’t going up from where it was polled to be in 2012 – but the number of people saying they will vote Labour is decreasing. Part of this is just national swing, of course, with the Labour vote going down across the board from its 42-43 point peak of a couple of years ago. But places like Birmingham Yardley, where a few years back I would have said the Lib Dems had no hope of holding, now see the party with a three point lead. No room for complacency, obviously, but some rays of hope at least in a group of seats Labour have pretty much banked as being theirs since about June 2010.

The headlines to come out of this polling were all about Clegg being only three points ahead in Sheffield Hallam and Miliband’s seat showing a huge UKIP surge. This is all just the political media sabre-rattling ahead of next year’s election; neither Clegg nor Miliband are going to lose their seats, let’s be serious here.

In another piece of good news from the same polling, the Tories are five points ahead of UKIP in South Thanet. This is the seat Nigel Farage is standing in and the poll takes this fact into account. With any luck, UKIP could be down to one MP post-May 2015, with Farage still not being able to touch the green leather he so desires.