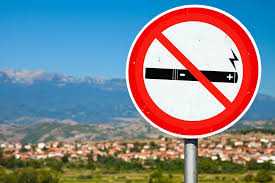 Just in case you were wondering, I am not a smoker. Nor have I ever been. I do have a rather annoying habit of pretending to smoke random, phallic symbol objects like pens and pencil, which I won’t go into the Freudian implications of here and now, but I have never really had any desire to smoke tobacco as a lifestyle choice. Mostly because, having tried them a handful of times while drunk, I think they taste terrible.

I open with this as a way of stating that what you are about to read is not the ranting of an ex-smoker reliant on his e-cig to cope. It is the thoughts of a liberal who thinks that the WHO is perhaps getting a bit carried away at the moment with the idea that banning the vapour producing things within all indoor settings is a bit much to say the least. That’s before we get onto the latest line in the e-cigarettes debate, namely that they are a gateway drug to cocaine or something.

The basic idea seems to be that e-cigarettes emit nicotine and it’s a drug, so that’s bad. Now, the reason actual cigarettes were banned from public places like pubs was because second hand tobacco smoke contains tar and carbon monoxide, not to mention a host of other carcinogens. It was a genuine, proven health risk to those who had to work in those environments, not to mention those of us non-smokers who quite like going to the pub. I recently watched football in an establishment very close to where I live that openly flouts the smoking ban in a way I have never seen elsewhere in Britain, thankfully, and it brought back what a horrible experience inhaling other people’s cigarette fumes was. I had to take a shower I stunk so much, and I was in the pub for less than two hours.

To contrast, I have been sat a table with more than one e-smoker at a time and not even really noticed. It is a completely different experience than being around real second hand smoke. And our lungs are pretty good at letting us know when they don’t like something.

The worst thing about the WHO call for banning e-cigarettes indoors is that it confirms the worst fears of the conservative minded. “You watch – first they ban cigarettes in pubs, then they come for your children.” And here you go: one step down the road to kidnapping in the minds of the UKIP prone, we banned real cigarettes, now we want to ban fake ones. Because we frown on nicotine, apparently because it’s bad for your heart. You know what, so is excess vodka consumption, so let’s ban the pub while we’re at it. Actually, come to think of it, the air quality is pretty bad in London, so let’s ban outdoor walking and make everyone live in a bubble.

While I’m off on one here, it really, really does not help the pro-EU cause in Britain to have the European Union carping on about this either, going one step further and wanting to ban e-cigarettes altogether. We need more useless crap like this from Brussels like we require a frite in the forehead.

Someone has to stand up for basic liberty here, and in this case I’m doing it since I have no skin in the game. True liberalism on display – it makes no difference to me personally whether or not the “indoor ban” goes ahead or not, but it still matters to me because I think it’s unnecessary and furthermore targeting people who have stopped smoking actual cigarettes and should be encouraged in their journey to do so permanently.

Stand up for the e-cigarette smoker, people, because who knows what they’ll want to ban indoors next.