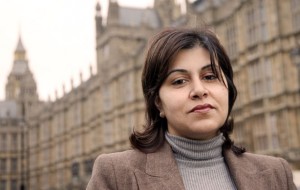 Yesterday, Baroness Warsi resigned from government. She tweeted that this was due to the current government policy and engagement with the war in Gaza. “With deep regret I have this morning written to the Prime Minister & tendered my resignation. I can no longer support Govt policy on #Gaza,” she said.

As you would expect, many in the bubble have weighed in with their verdict on the matter. Dan Hodges offers his view that it was an expression of anger about her being reshuffled out of the Cabinet. There are other people speculating that she had been waiting to quit for ages and had finally found a reason to do so for supposed principle. In other words, the move was political, not borne from a sense of rectitude.

The first problem I have with this is that Sayeeda Warsi was shuffled out of the Cabinet two years ago, so it does seem an awfully long time to wait to quit government out of spite. Secondly, she does seem quite genuinely vexed by the situation in Gaza and you’d have to be very cynical indeed not to empathise with her reasons why – is there a suggestion afloat that somehow Baroness Warsi is a fake Muslim? Obviously absurd, but you’d have to put it into your thought process to take some of the Westminster commentary on her quitting seriously.

Sayeeda Warsi’s politics are not my own. But I commend someone, in this day and age, standing down from government on a matter of principle. We hear constantly about how politicians aren’t authentic, they don’t really believe in anything. Then, when one of them does something that stems directly from their morals and either hurts or ends their career in government, it is automatically assumed that the reasons couldn’t be as described and ulterior motives must be at play.

Seriously, the whole “revenge” angle doesn’t even make sense to me. With both gender balance and BME representation important to Cameron politically, Warsi could have almost certainly walked into government again post-2015, should the Tories be back in government. But instead, she says the following: “Approach and language during the current crisis in Gaza is morally indefensible, is not in Britain’s national interest and will have a long term detrimental impact on our reputation internationally and domestically”. If Baroness Warsi isn’t doing this because she’s actually upset about the government’s stance on Gaza, then her idea of politics is very strange indeed. Because if there’s one thing Cameron does not need right now it’s one of his former ministers making him have to field more questions about the Middle East.

I think we should be more prepared for politicians to display probity, just in case, every once in a while, they decide to act on those thoughts.