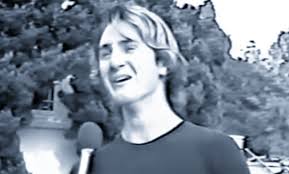 Many years ago, my Chicago Connection rolled into London from wherever he’d last been. Kenya? Malaysia? Guatemala? He had with him a VHS tape (remember those? They were archaic even back then) that he said contained a film entitled “The Beaver Trilogy” that I just had to see immediately. I looked at him semi-sceptically until he described it to me. Having heard his mini-synopsis, I decided that yes, I did indeed need to see the film immediately.

It runs about 90 minutes in total and, as the title would suggest, is split into three distinct portions. The first part is a documentary about a guy named “Groovin” Gary who lives in a small town called Beaver, Utah (thus the name of the film). The filmmaker, Trent Harris, was apparently outside of the TV station where he worked at the time (1978) in Salt Lake City, and Gary was just hanging around out front. Trent thought he looked interesting, so he stuck a camera in Gary’s face to see what would happen next.

First of all, it becomes clear that Gary has driven the two hundred miles from Beaver to Salt Lake to simply hang out in front of the TV station hoping for God knows what. He is desperate to become a “star” and the Salt Lake affiliate station is, rather sadly, what he associates with this ambition. Suddenly finding himself in front of a rolling camera, Gary is chuffed beyond belief. He begins doing impressions of John Wayne and Sylvester Stallone, not good, but not bad impressions, breaking into his infectious laugh every few seconds. He is a ball of pure joy, his dream suddenly literally there in front of him.

Gary takes Trent to see his most prized possession, his car. The automobile is like a time capsule of the 1970’s. He calls it “Farrah” after the then popular Farrah Fawcett. There is an 8-track tape console. After this bit plays out, a handwritten letter appears on screen. Trent Harris reads it out in voiceover: it is a letter from Groovin’ Gary, asking Trent if he will come to Beaver and film the local talent show he is going to be appearing at, where he will be doing an imitation of Olivia Newton-John. Gary mentions near the end of the letter that he is so upset by the prospect of Trent possibly not coming to film the talent show that the only thing that calms him down is “watching Mr Rodgers Neighbourhood and Sesame Street”, both of those being shows for small children that were popular on American television in the late 1970’s.

We then see Groovin’ Gary himself again, this time at the Beaver mortuary; it is apparently the only place in Beaver in which Gary can get his makeup done. This scene, when we see Gary transformed into a strange version of Olivia Newton-John, is perhaps the key one in “The Beaver Trilogy”. Gary is incredibly nervous throughout this whole bit. He is keen to assert his masculinity, emphasising that although he is getting made up to look like a woman he is all man and “enjoys being a guy”, and even says at one point “I’m a man, not a girl”. He starts talking about football shortly after this last statement.

Also, it is clear that the cameras being there and the pressure he now feels to perform has made him extremely nervous. He babbles tellingly throughout his transformation into “Olivia”, psychologically exposing himself in a way that I always find a little hard to watch. Making the whole thing even stranger is that Gary has a very masculine face, replete with a chiselled jawline, and subsequently makes a less than convincing drag queen. This scene ends with Gary doing a terrible Olivia Newton-John impression, saying the telling words, “I guess I’d ought to get going now”.

We are then treated to the other acts from the Beaver High talent show, all of which are reassuringly amateurish (the first act is two sisters who sing an instantly forgettable ditty entitled “The Happiest Girl in the Whole USA”). We are shown that there are about ten people in the audience before the MC introduces the final act as “Olivia Newton-Don”. Gary appears on stage, in the drag outfit we last saw him in, singing a song called “Please Don’t Keep Me Waiting”. It is a performance so full of pain and desperation, combined with a clear lack of vocal talent, that it is painful for the viewer as well. It’s all there in Gary’s gyrations and horridly strained voice: his need to get out of the narrow minded environment he’s spent all his life in; the fear of the greater world that will almost certainly keep him contained within those narrow environs. And that’s what eats away at him, the knowledge that he’s probably never going to escape from Beaver and that perhaps this little appearance on Salt Lake TV will be the pinnacle of a life that will only spiral downwards.

The first portion of the trilogy ends with a sort of post-match interview with Gary (who appears relieved, probably still basking in the short lived glow of his biggest moment), followed by Farrah driving off into the sunset.

The second part of the trilogy is a narrative recreation of the first part, the documentary we’ve just seen about Groovin’ Gary, pretty much a shot for shot recreation of it. What is of interest, however, is that the part of Groovin’ Gary is played by……….Sean Penn. I swear, I’m not making this up. A very, very young (late teens, nineteen, I think) Sean Penn, in what I’m told was his first ever screen appearance. The major difference between the doc and the Penn narrative recreation is the denouement, which was inspired by actual post-documentary communication between the real Gary and Trent Harris. Apparently, Gary got in contact with Trent a few days after the talent show and begged him to destroy the tape that had been made of Gary in Beaver, saying that he was having a lot of local trouble on account of the original performance and that if it went out on state wide TV, Gary could face even more problems in the town.

The fictitious version of Trent as presented in the second segment of “The Beaver Trilogy” is callous and tells Gary that he’s putting the piece on TV regardless. This middle section ends with Sean Penn as Gary wrapping his lips around the end of a shotgun, about to kill himself, before the phone rings. He puts the gun down and answers. It is a girl in his class who has called to say she thought he was “really funny” in the talent show and could he do his Olivia impression at her party that weekend? Sean Penn as Gary puts down the phone and then places “Please Don’t Keep Me Waiting” on over his stereo, singing along as he weeps.

The third and final portion of the trilogy is another narrative remake of the original Groovin’ Gary documentary. Only this time, instead of the cheap looking VHS-C video the other two were shot on, this final portion is made using 35mm film. On this go round Groovin’ Gary is portrayed by……Crispin Glover. For those who don’t immediately recognise the name, he played the dad in “Back to the Future” (“I’m your density”). This one is much less of a shot for shot remake of the doc like the Penn second portion was, and more of a general retelling of the Beaver-Gary story (with the crucial bits left in, which I’ll come onto in a second). It has a scene, as a for instance, right after Gary has sung “Please Don’t Keep Me Waiting” with him getting chewed out by a teacher backstage, who tells Gary he looks like a “fruit” who “is going to embarrass the town” when the footage goes out on TV.

The Crispin Glover third part also has its own invented denouement, this one amongst the greatest endings in motion picture history. I don’t want to tell you anymore – just see the film. All I’ll say is that it is my favourite ever cinematic statement of liberalism and gets to me every time, even though I’ve seen the film now more times than I can recount.

Both the Penn and Glover recreations contain within them a recreation of the mortuary/make-up scene as well as the singing of “Please Don’t Keep Me Waiting” at the talent show. Only neither the Penn nor the Glover re-enactments of these bits from the documentary come close to the cringe worthy emotional nakedness of the corresponding, original documentary scenes. In fact, as you may have already gathered, the thing that made me rip “The Beaver Trilogy” out of my Chicago Connection’s hands and shove it into my VCR as quickly as possible was the Sean Penn/Crispin Glover hook. But the best of the three parts, by miles, even taking into account the immense ending of the Glover portion, is the original documentary, the first segment with the actual Groovin’ Gary. Something about his loneliness, his desperation, can simply not be recaptured by an actor.

What makes the film work, and despite it’s very bizarre structure gives it something verging on a normal narrative arc, is that it starts with Gary in front of that TV station in Salt Lake, desperate to be a star somehow and yet not knowing how to make that happen. It ends with Crispin Glover, a noted Hollywood actor, carrying out his redemption, and in-between having his story re-told using one of the most famous actors of the last half century. Weirdly, and against every conceivable set of odds, Groovin’ Gary sort of made it, albeit in a very strange way.

Now the bad news: “The Beaver Trilogy” is not commercially available. The reasons are complicated, mostly having to do with song publishing rights (“Please Don’t Keep Me Waiting” is apparently very expensive to licence and makes any commercial release a no go, or so I’ve heard). You can get it from Trent Harris himself. Or you can see it on YouTube. It’s usually there, although every once in a while it gets taken down. A poor fate for one of the greatest movies ever.