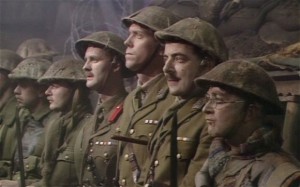 WWI memorials are the rage at the moment, the centenary of Britain joining what remains possibly the world’s most horrible conflict being today. The Prime Minister has given a speech on the matter, citing the fact that Britons a century ago went into battle because there was “an important principle at stake”, that being the Germans’ defiance of Belgian neutrality. The tone of Cameron’s speech is that WWI was important, a conflict that Britain had no choice but to enter in to. I think this need to create something good out of the war of 1914 through 1918 is odd and not particularly healthy either.

At the onset of the war, the Germans marched into Belgium as it was the easiest way they could see to defeating the French quickly. Essentially, march across Belgium, get past the inferior French resistance around the border and be in Paris by September. Job done. Problem was, Belgium was protected by a series of agreements reached between all of the major powers of Europe over the course of the 19th century that had led to the idea that Belgian neutrality was inviolable. So Germany invading Belgium was a stupid plan because it brought Britain into the war needlessly. It was a move that seems in retrospect to be emblematic of the folly of that whole summer – every side thought they could stroll easily to victory, a century of careful manoeuvring beginning with the Congress of Vienna suddenly cast off impetuously as each Empire sensed a large victory just over the horizon.

The notion that defending Belgian neutrality in 1914 was worth sacrificing almost a million young Britons, and maiming another million and a half, must strike most modern people as rather odd to say the least. Michael Gove railed a few months back about the way the “Blackadder Goes Forth” impression of WWI had been imbedded, but it is hard not to see at least large portions of that viewpoint as valid. It was a horrible, largely pointless war and we should be able, one hundred years on, to simply recognise that fact. It was a mistake of epic proportions, one whose sole value seems to me to be the demonstration that large scale, one-on-one, technologically advanced warfare between large states is a bad idea.

Perhaps I’m overstating things, but given both Gove and Cameron’s seeming need to defend the First World War, it feels like there is a Tory narrative on the war that exists. I don’t really understand it, but perhaps it’s tied into the idea of Empire that never completely recedes from the Tory consciousness? There’s something about the concept of Britain having always acted nobly in the past in there. Hell, Belgium weren’t particularly wonderful at the time, the treatment of the locals in the Congo being a prime example. It’s a way of looking at the world that runs into the present day, with Boris Johnson talking about how Putin and his deeds in the Ukraine are making everyone cling on tighter to the EU. Boris doesn’t mention, “Except Britain, of course”. Perhaps it is this need to justify the past that makes the present harder to deal with.

Cameron goes on in his memorial speech to credit the Great War with “massive improvements in our world” including, rather bizarrely, women getting the franchise, as if that would never had happened had millions of men not died in Flanders. Again the need to exonerate the war and find reasons for it to be seen as worthwhile. I don’t think Britain needs to beat itself up about WWI; but nor do we need to justify it as a great deed either. The whole thing was a colossal error for Europe and it’s all right to just admit that. Perhaps if we did, more lessons from that war would be easier to absorb.

So I would prefer to commemorate the memory of those who died in WWI with grace and appreciation for their sacrifice. Because if they died for anything, they died to make us understand that large scale nations engaging with one another on the battle field is disastrous, and even though it took a whole other world war twenty years later for the lesson to finally sink in, we did learn it eventually. So tonight, plop on “Blackadder Goes Forth” and raise a glass for the Tommies who fell. We owe them a debt of gratitude, just not the one the Prime Minister have you to believe.