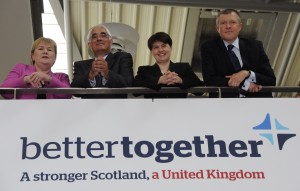 I was in Aberdeen this weekend, covering Scottish Lib Dem conference for work. It gave me a chance to get some insight into how people on the ground are feeling about the Independence debate and how the Better Together campaign is proceeding. The vibes were mostly negative. People who wish to see Scotland remain in the Union are spooked by the Yes side’s gain in the polls over the past few weeks for a start.

But it is more than that. There is fear that across the central belt of Scotland there is a large group of disaffected young people who see little future for themselves and may just decide to have a punt on independence because, well, why not? Lib Dems in Scotland criticise the Better Together messaging for being too relentlessly negative. I’m not so sure about this point; for a campaign looking to maintain the status quo negative messaging tends to work in the end – whatever campaigners may think about it. No, I think a greater concern is cohesion.

On the Yes side, you have the SNP as the hub. This is handy, because here is an organisation whose raison d’etre is an independent Scotland. On the No side, you have three parties who all loathe one another. The communication and strategic comms was always going to be problematic as a result. This is before you get into the divisions within Scottish Labour. A campaign looking to keep the United Kingdom united may fail for the ironic reason for not being united enough itself.

But I don’t think so. I’d still put my money on the No side to win come September 18th. The reason is that people tend to vote with their head and not their hearts when it comes to such a huge decision. Further to this, as Ming Campbell rightfully pointed out at conference, Scottish independence has no arguments ultimately powerful enough to cut through to the majority of people living there. Calls for independence around the world tend to be driven by at least one of the following: oppression, lack of representation, human rights violations and/or rule of law being denied to certain parts of a country. None of these apply in Scotland. No one can argue with a straight face that the Scots are being repressed in any way. In terms of representation, the last Prime Minister was Scottish. Blair, many forget, was born in Edinburgh. There has been a Scot in one of the two main roles in the Treasury continuously for the past 17 years, barring the two weeks David Laws was Chief Secretary.

Still, Better Together shouldn’t be complacent. But they won’t be. Once the summer is upon us and the short campaign starts, the No campaign will strike back, and hard. It will be interesting to see how Alex Salmond, the SNP and the Yes campaigners react to this.