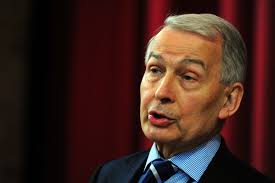 Frank Field wants to get Blue Labour up and running again as an above ground political, mainstream mode of political thought with a book due to be published in February entitled Blue Labour: Forging a New Politics. I use the words “above ground” due its dwelling below the surface since 2011, when Blue Labour’s leading light, Maurice Glasman, said in an interview that the Labour Party should be looking to reach out to groups such as the English Defence League. I believe Maurice when he says he didn’t mean it to come across as it sounded, but the incident nonetheless damaged Blue Labour’s ability to move forward. For the time being, at least.

But like I mentioned, the whole thing only moved subterranean; it never really went away. This is because the whole mode of thought has a great deal of salience with a large section of traditional Labour voters. “Faith, family, flag” is the motto, which may sound to another section of Labour voters a great deal like traditional conservatism. That’s because it sort of is. The essential concept of Blue Labour is that socialism can only exist within a socially conservative society, and that the true enemy of socialism is not conservatism – it is liberalism. On this point, if no others, I wholeheartedly agree with the proponents of Blue Labour.

The problem for Field and indeed the whole Blue Labour project is that February 2015 may well be too late for such a re-launch. Field has spoken before about traditional, blue collar Labour voters being taken for granted by New Labour, the oft quoted, possibly apocryphal Blair saying that those core Labour voters would continue voting Labour despite any warming the party might do towards neo-liberalism as “they have no where else to go”.

Thing is, all of a sudden, they do. In the form of UKIP, who seem to be trying to morph into a strange, ultra-charged version of Blue Labour of late. To the informed observer, one who is aware of the libertarian streak found within the folds of UKIP’s 2010 manifesto, this appears barely credible. But the messaging seems to be working on the party’s target audience, one who is tired of the urban, liberal feel to much of what the Labour Party has done or said over the past two decades. And thus it seems, Labour could be starting to lose these people in ever greater numbers to the UK Independence Party, who whatever else they may say and do, seem to speak to this group’s concerns regarding immigration.

I’m intrigued to see where all of this leads, both for the Labour Party and for UKIP. Douglas Carswell’s hardcore libertarian viewpoint, one which is in many ways the opposite of Blue Labour, will surely rub up hard against this strategy of appealing to traditional Labour voters at some stage. Or for Labour, who surely risk alienating London voters with a socially conservative, parochial agenda. Interesting times. As a liberal, I look forward to seeing what Frank Field’s book has to say about all of this.