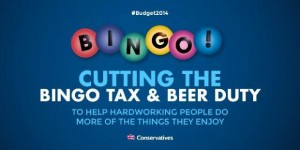 Yesterday was budget day. It was dominated, rather strangely, by two things that had very little to do with the budget itself. One was how bad Miliband’s response on the floor to it was (and how you saw that depends greatly on your own partisan interests). The second was the now already infamous “Beer and Bingo” ad (see above) that was tweeted by Conservative Party Chairman, Grant Shapps. The vibe from Twitter was that the image was a huge cockup, demonstrating how fatally out of touch with the electorate the Tories are.

As for how I feel about the “Beer and Bingo” quasi-poster is what you’d expect. It makes me want to vomit. It is depressing that the largest party in our parliament has aimed so very low. However, I am also aware of the fact that I am precisely the type of person the ad was meant to annoy, being as I am a muesli munching member of the liberal Westminster bubble. People like me were always going to hate the beer and bingo pitch. As for the Tories’ target audience, the UKIPers and those leaning towards the Purple People’s Party, I think the poster might have worked for them. It is naff, silly, patronising and looking like something from 1978. Surely perfect for the crowd the Tories need to pull back onside for the 2015 general election.

All of this is academic now, as the Conservatives have taken whatever they might have gained from the ad with the maybe ‘Kippers and thrown it into the furnace. They have now, idiotically I might add, disowned the poster entirely. In fact, they’ve tried to write the thing, Ministry of Love style, from existence, as Isabel Hardman reports in the Spectator. Whatever you think of the Beer and Bingo motif, disowning something you’ve had your party chairperson put out on social media the very day it comes out is really stupid. Surely Lynton tested this stuff to death and it came out positively with the groups they were targeting? They can’t seriously suggest that Shapps went rogue with this, can they? This was clearly a co-ordinated HQ social media effort – otherwise Shapps would be out of a job by now.

My final verdict on budget day was that I think, overall, it was a bad day for both of the two main parties. Am I the only person who thinks that both Labour and the Conservatives appear at times to be seeing who wants to lose the next election the most passionately?