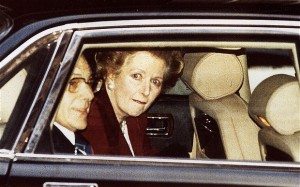 Shadow Chancellor Ed Balls, in an attempt to claw back some terrain after the Autumn Statement went all his opponent’s way, has described Osborne as “more extreme than Thatcher”. This is a line that has been echoed across the Left during the course of this parliament. I understand the reason – Thatcher had a divisive affect on the nation, and thus trying to tar the current gang of Tories with some of the same might be helpful in getting Labour back into government.

Only I don’t think the thinking behind this is sound. Because people know, even those on the Left, deep down, that this simply isn’t true. Margaret Thatcher radically changed the country, dismantling huge chunks of the post-war settlement. Moribund industries were swept away with haste. Comparing that to Osborne gently chipping away at the debt by making most of the easy savings first and then reducing departments a few percentage points is hardly in the same category, never mind more radical.

What’s happened this parliament has been anything but “gentle”, I hear you say? Then I’d suggest you buckle up and prepare for what’s to come, because the cuts are about to get a whole lot deeper. And this is important to say: that will be the case no matter who gets into government after the next election. Don’t believe me? Then listen to what Ed Balls has to say on the subject, from the very same Guardian interview in which he described Osborne as more of a radical state reducer than Baroness Thatcher:

“There will be cuts under Labour. I do not just want the current budget back into balance, I want it back into surplus. I have not said I want it in surplus at the end of the parliament, but as soon as possible in the next parliament.”

Surplus, he says, surplus. As soon as possible. The budget in balance, i.e. no deficit. The only way that’s happening is with the type of cuts not seen since before the Second World. So forget about Osborne being more extreme than Thatcher: Ed Balls might end up having to be, by his own, present day admission.

So what does Labour do if they have to make deeper cuts than the Coalition did, after having said that Cameron and Osborne were more extreme than the Thatcher governments? How do they get out of that hole?

And what does the Left do, having bought this line for five years? Does it finally come to terms with austerity and figure out that if social democracy is going to survive it needs to adapt (I, for one, hope so). Or does it fool itself into thinking a Labour cut somehow isn’t as bad as a Tory cut (a line Balls wants you to swallow, by the way). Or does the Left explode, splintering in all different direction as a Labour government reduces the state to its lowest percentage against GDP in the last eighty-odd years?

Given Labour are very unlikely to be put in that position after the next election, I guess we’ll probably never know how that one might have played out. The Tories will very likely be back in government, one way or another. If this does occur, I do hope the Left of this country doesn’t waste that parliament like it has the last five years. If you don’t like neo-liberal economics, or at least neo-liberalism as currently practiced, come up with an alternative, a plan that can be sold to those who might not be amongst the #CameronMustGo brigade. As a veteran of the Yes to AV campaign, let me tell you this: it’s no fun when you realise you’ve been talking to yourself the whole time, while the rest of the country is going off in another direction.