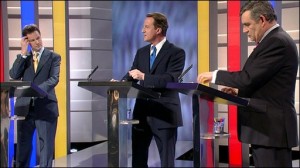 David Cameron has dropped his long held reticence to having another round of Prime Minster debates in 2015 by coming up with an new format for them hitherto unknown (or at least someone in his office has): 2-3-5. Or probably 5-3-2, but we’ll get to that in a second. No, this is not a reference to the pyramid formation used in association football, but rather a reference to who would take part in the debates and when. So the “2” would be one debate between just Cameron and Miliband; the “3”, would be Cameron, Miliband, Clegg; the “5” would be Cameron, Miliband, Clegg, Farage and Natalie Bennett, the leader of the Greens.

Now leaving aside the possibility that the “2” would come first and the “5” last (which would be total lunacy for Cameron as opposed to mere folly), and so the whole thing would presumably finish on a Cameron-Miliband fight to death for the keys to Number 10, this is still a very bad idea that the Conservative Party have come with. They have done so in the very same spirit they have adopted when committing every other serious blunder they have made this parliament – they are trying to get around the UKIP problem.

David Cameron doesn’t want to face Nigel Farage in a debate. Fair enough; Cameron has a complex take on the EU situation, while Farage has a simple one – exit. And Farage’s approach is much more popular with grassroots Tory activists. I get it. Which is why all Cameron had to do was commit to the debates setup from last time: Cameron, Clegg, Labour leader, three times. He could have said he was standing on precedent; that it be would wrong to do it any other way; that’s all the other leaders would agree to. He would have got some flack from Farage for about a week and then everyone would have moved on with their lives. Instead, he’s now committed himself to facing Farage; a big mistake, and it’s not even the biggest problem the “5-3-2” format contains for Cameron.

The Prime Minister thinks he can get Farage out of the way early on and then not have to think about him for the rest of the campaign. This will not work; by Farage getting to speak on national television, an opportunity he will use mostly to harass Cameron on Europe, the UKIP leader will be allowed to set the tone of the rest of the short campaign, at least as far as the Tories are concerned. It is worth mentioning here that the Greens will get a boost that the Labour Party will blind themselves to until after it’s happened, in the same way that both the Tories and Labour underestimated Clegg in 2010. Just getting the oxygen of a national platform to lay down what they are about will help the Greens – at Labour’s expense.

Next comes Cameron-Miliband-Clegg, and the comparisons with 2010, with all eyes on Clegg. This will actual be a good format for the Lib Dem leader – he gets to warm-up with the first one, which will be dominated by the Greens trying to shout their message as loudly as possibly during their brief glimpse of the national stage, while Farage tries to grind Cameron into the dirt. The second debate will be his chance to strut his stuff and define himself exactly as he will want to: as the moderate candidate, stuck between two extremists.

The worst aspect of the pyramid formation for Cameron though, is the final debate. After the Farage-Bennett fireworks, and the fascinating, possibly quite weird Cameron-Clegg fighting over who did what and blocked what in government (that the political hacks will love every second of, ensuring it gets poured over in exquisite detail), will be a very, very, very stale debate between Cameron-Miliband that will only call attention to the fact that Britain is no longer a two party country. Which is bad for both of them. The absence of the other party leaders will really be felt, to all of the smaller parties benefit.

Cameron and those around him have made the calculation that Miliband will come off the worse out of all of this. Even if that’s true, and it may well be, under the current voting system and the current boundaries this won’t matter. The whole thing will almost certainly give a boost to UKIP – possibly handing accidental victory to Miliband and a lifeline to the Lib Dems.

The Prime Minister still has time to sign up to good old, solid “3-3-3”. If I were him, I’d abandon the pyramid.