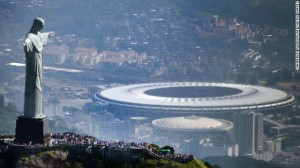 There’s a great Simpsons sketch that brilliantly illustrates the American viewpoint on association football. We are presented with the concept of a “World Series of Soccer” in which Mexico and Portugal are pitted against each other for world supremacy. The Americans, of course, cannot fathom any sport in which they don’t come out as World Champions, so that’s part of it. The other is seeing all these nations that they feel inherently superior to beating them at sport. Like when Iran defeated them in the World Cup a few tournaments back. The Persians winning that match probably did more to set back the advancement of “soccer-ball” amongst our ex-colonial cousins than the 1994 World Cup did to advance the beautiful game for those to whom “America” is a two-syllable word.

Sufficed to say, it is very unlikely the USA is going to win the World Cup that begins today in Brazil. In fact, I would go as far to say that if this happens, please take it as a sign of the apocalypse. Which many Americans literally believe is on its way anyhow, so the whole thing would be hand in glove for them. Stop your light and possibly inappropriate Septic Tank bashing and get on with the prediction for the World Cup your headline promised us, you say? All right then.

There are, as always, eight groups of four. I say as always; Russia will probably lobby to have their World Cup increased to 48 teams as a money-spinner. Then Qatar will ask for their tournament to contain 96 teams, with the group stages to last for three months alone. At least this means that by the time we get to the knockout rounds, the temperature will actually be reasonable to play football in.

Right, Group A contains the hosts, Croatia, Mexico and Cameroon. Tough group, but the Brazil team would still need to show up drunk for most of the matches not to top the group. Which leaves the question open as to who finishes second. I’ll give it to Mexico on a Latin American home continent (sort of) advantage thing. The winner of the Cup is not coming from this group anyhow (you see what I did there? Foreshadowing…), so don’t spend too much time worrying about it.

Group B is the Spain/Netherlands bunch with Chile and the Aussies making up the numbers. Spain to top the group. Columbia and Ivory Coast top Group C. Then comes England’s group, which I’m sorry to be so pessimistic about, but I do not think England will get out of. Italy tops with Uruguay in second.

Group E is a weird one, with France expected to suck. They will, mostly because they rather foolishly left their best player at home for no apparent reason, which is never a wise move. The Swiss and Ecuador advance. Group F is Argentina’s with the Bosnians taking the penultimate prize. Germany and Portugal arise from Group G. Russia and Belgium, Group H.

Now we’re at the really fun part, the knockout rounds. Or at least they should be; actually come to think about it, the last two World Cups had really great group stages with pretty rubbish latter stages. This can be the problem with so many teams in the tournament; you end up with these terrible second round matches that both sides are just desperate not to lose, so you end up with 120 minutes of the most turgid football imaginable, waiting for the penalties to arrive.

Let’s get through the second round quickly so we can get to the quarter-finals. You remember those? It’s the place England used to get to and everyone in the country complained about it, but now we realise how much it really did represent an overachievement. Brazil-Netherlands looks tasty, but unfortunate for the Dutch who go home early. Uruguay beat Columbia in a classic. Switzerland-Bosnia is not so classic – the Swiss get to the quarters anyhow. Germany panzers Belgium (after writing that, I only then realised how historically insensitive it was). Spain beats Mexico without breaking a sweat. Italy beats Cote D’Ivore with a last second dive by an Italian striker that wouldn’t have fooled a pub league ref in England, but will sadly get called by the best Venezuela has to offer the world in terms of football officiating. Argentina beats Ecuador 5-0. Portugal squeezes past Vlad’s mighty men.

Right, the quarters. In a repeat of the 1950 World Cup final, only in reverse, Brazil beat Uruguay 2-1, leading many people to wonder if the hosts have it in them. Which will be fair enough, because they don’t. The Germans cruise to the quarters, the minimum expectation for them at any World Cup. Spain beats Italy on penalties. Argentina crush Portugal, getting people talking about whether this is perhaps Argentina’s tournament to lose.

Semis: Brazil-Germany will be a classic, but the Brazilians will squeak into the final. Spain-Argentina will be set up as a clash of the titans but when the day comes, Argentinean dominance of the whole thing continues with an emphatic victory over the reigning champs.

All this sets up the final that, as neutrals, or as England fans anyhow, we’d all like to see: Brazil v Argentina. It will be a great match, one for folklore. Brazil score first, on the twenty minute mark, a great cross from Neymar to Fred, blasted into the back of the net. But Argentina fights back and just before half time scrape a dodgy goal that comes off Mascherano’s backside. The second half begins slowly, both sides desperate not to make an error. As the match remains 1-1 deep into the 90 minutes, it looks like extra-time, perhaps even penalties. But then Messi grabs the ball deep in his own territory and does a Maradona 1986 impression, scoring one for the ages. This completely deflates Brazil, who concede another to Messi, this time on the break. Final whistle: Argentina 3, Brazil 1.

That’s just the way I see it. Luckily, you don’t have to take my word for it. Brazil v Croatia kicks it all off tonight at 9 PM. Can’t wait.