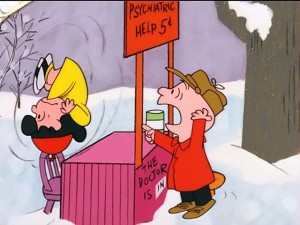 For anyone who had a North American childhood, this time of year calls up memories of the many television specials that dotted the landscape annually. There was “How the Grinch Stole Christmas”, a wonderful twenty-minute cartoon in which Boris Karloff voiced a green goblin Scrooge-like creature. This was unfortunately partially ruined by a DNA-changingly awful Jim Carrey live action feature film made near the turn of the century with the same title and premise. It padded out the story to over an hour and a half, filling it in with boring back-story. Then there was “Rudolph the Red Nosed Reindeer”, better known amongst most children in the Americas as “Budget Rudolph” due to its inherent cheapness. An entrant in the little populated “felt-mation” genre, “Budget Rudolph” is actually pretty unwatchable; terrible Burt Ives songs scar the soundtrack, as does whomever is behind Rudolph’s incredibly irritating intonation.

This leaves one Christmastime classic unmolested, “A Charlie Brown Christmas”. Brown and his buddies never made it in Britain, but they are a cultural institution in the U.S. (and thus by automatic extension given it is simply the 51st state that gets healthcare provision, Canada). So every year on it came, and we watched it unquestioningly. Having now had kids and so thus finding myself watching it again, what do I think of it as an adult?

For a start, the theme music is amongst the saddest of melodies ever created. It’s called “Christmas Time is Here” and was written especially for the cartoon special. I’ve listened to a few versions of the song now; Diana Krall did one. It still sounds unbelievably sad, no matter which version – not depressing, not morose, just sad, in the purest expression of the term.

The plot, as you would imagine for a twenty-minute children’s television cartoon, is pretty by the numbers. Charlie Brown feels depressed. He goes to see Lucy, who is a child psychotherapist, sort of. In fact, she’s in Charlie Brown’s class and runs her own sort of psychiatric booth. Anyway, she says that Charlie Brown will feel better if he directs the school nativity play. So he does. He’s then gets tasked with obtaining a Christmas tree for the class. So he goes out and gets a sickly little quasi-twig he takes pity on. Everyone laughs at Charlie Brown (everyone always laughs at Charlie Brown. Because crippling childhood depression is hilarious). Once Brown has departed the scene, crippled with guilt, the other kids dress up the tree and decide it’s not that bad.

Actually, having now written all of that, perhaps it isn’t that by the numbers after all. The stuff about amateur psychiatry is pretty weird. And I didn’t even get into the fact that Charlie Brown has an anthropomorphic dog who wins decorating competitions.

Right, so now that you’re up to speed: I was thinking someone should make a sequel to this masterpiece, this one following in the footsteps of the Jim Carrey “Grinch” horror-show and be live action. In this sequel, Charlie Brown is all grown up and unemployed, living on his own, on the dole. His only friend in the world is Snoopy, his dog, the same one who won the decorating competitions, whom Brown hallucinates speaking to him. One day, his old friend Linus, who is now a teacher at their old school, looks Brown up. Seeing how depressing Charlie Brown’s life has become, Linus asks Brown to direct the school nativity play as a means of redemption. Charlie Brown reluctantly accepts the offer (Snoopy talks him into it).

But Charlie quickly realises he’s made a terrible error. He finds himself trying to organise the kids of the very same people who tormented him as a child, the ones who had crushed his soul and sent him on a path towards an adulthood riddled with loneliness and depression. A grown up Lucy, now a practicing psychiatrist, tells Charlie Brown that she “always knew he’d end up a loser”. This is the last straw – Charlie Brown walks down the road to the nearest Wallmart, buys military grade weapons, and comes back to the school and liquidates everyone. The last ten minutes of the movie would just be a dialogue free montage of the different Charlie Brown victims, lying lifeless, while “Christmas Time is Here” plays over and over again.

The amazing thing is, this would still be less horrific to watch than the Jim Carrey version of “How the Grinch Stole Christmas”.