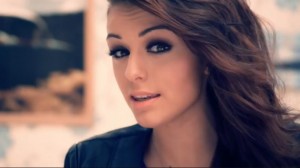 I have ranted many times about the death of rock and rock, here and in other places, and I can say with regret that a further spike has now been driven into the mausoleum that hold the remains of the concept of teenaged rebellion as glorious experience. Cher Lloyd, the singer who made the 2010 X Factor far less eat-your-own-foot turgid for those of us forced to sit through portions of it, apologised yesterday for her “general attitude” when competing on the show, and says she thinks she could have been a “much happier person” at the time.

I say that she made the 2010 version of the programme more interesting, not because I particularly liked her music but due to the fact that for possibly the only time in the last ten years, I was confronted with pop music that made me think, “I don’t really get this because I’m too old.” As opposed to the usual reason, which is, “I don’t get this because there is nothing to get. This is anodyne, balls-less, soul destroying horse shit.” So I am sad that Ms Lloyd has felt the need to beg pardon for her previous behaviour, as it further demonstrates the liberal consensus retreating in front of our very eyes. Or so I have said to myself in more hysterical moments over the last twenty-four hours.

So what exactly did Cher Lloyd do on the X Factor that requires an apology? She was a little bit rude to Simon Cowell a couple of times. Wow. Uh, last time I checked Simon Cowell was a complete arsehole. On purpose, as in, his television personality is specifically and intentionally designed around him being a total knob. He is the crusher of little people’s dreams. The guy who tells the waitress who has only managed to not top herself all these years because she’s convinced herself she’s going to be the next Susan Boyle, that she hasn’t actually got what it takes, luv. Shouldn’t we be encouraging the minefield of human frailty that makes up the bulk of X Factor contestants to give Cowell an earful more often, not less? Seriously here. All X Factor contestants should apologise to the British public for inflicting their soggy Karaoke on us. But Cher Lloyd the least of any of them. And yet she’s the one saying sorry. I despair.

Someone said to me just now, “No, Cher Lloyd is saying sorry for slagging off Cheryl Cole.” But Lloyd already apologised for that. In bloody 2012. How much humiliation must X Factor contestants suffer? It’s starting to remind me of the Middle Ages. What next? One Direction bringing Gary Barlow a human sacrifice? Matt Cardle slicing off portions of his body to give to Louis Walsh in order for the Irish ex-producer gone “TV funny man” to obtain his “pound of flesh” (he could lose a few more pounds of flesh, I hear Grazia mag joking).

Anyway, all forms of decent musical entertainment are dead and I should just get over it, shouldn’t I? Stop living in the creatively exciting past, senior citizen. Start playing with your X-Box, or whatever it is kids are playing with these days, and shut up about rock and rock. All right, I’ll try.