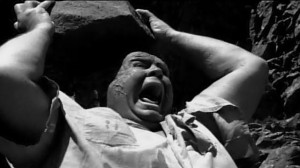 “I don’t know…..I like Francis as an actor but really he should have stayed in front of the camera. As a director, he really didn’t know what he was doing.” – Ed Wood Jnr.

When the man noted as being the worst film director of all time says you’re rather lousy at this filmmaking malarkey, perhaps another career choice should have been considered. Yet Francis ploughed on in obscurity, at least during his own lifetime. He owes the knowledge people like me have of his works pretty much solely to Mystery Science Theatre 3000, the show which understandably had a field day with Coleman’s piles of cinematic poo. I suppose I should do a brief introduction to the man we’re discussing here. Coleman Francis was a bit part, jobbing actor throughout the 1950’s and into the early 60’s. Then he decided he had what it took to make movies himself. A decision that was wrongheaded in the extreme. He made three films, all of which have been rightly derided as some of the lamest attempts at cinema ever brought to fruition.

Coleman’s directorial debut, The Beast of Yucca Flats (1961), is easily one of the worst films ever made. Francis, upon discovering that on-location sound was very costly, hit upon a “brilliant” idea: he would invert normal filmmaking rules and only ever show someone in shot when they weren’t speaking. It is worth watching Yucca Flats once (and once only) just to see for yourself how incredibly unsuccessful this filmic concept is. So just to be clear, two people are having a conversation. Two-shot establishes the characters. Then, it cuts between the two people, but only rests on the one whose mouth is closed at any given time. It really does work so much less than you could ever possibly imagine.

The other notable thing about Yucca Flats is the incredibly inane and totally random use of voiceover. There is a narrator who interjects every once in a while (Francis himself, obviously), but hardly ever to tell you what the hell is actually going on with the plot, an intervention that would be most welcome. Some notable examples include: “Feed soda pop to thirsty pigs”, “Flag on the moon. How did it get there?” and my personal favourite, “A man pushes a button. Something happens.” It goes without saying that these voiceovers correspond in no way whatsoever with what is happening on screen when they appear.

As for the plot of the film, well I’ll try my best here: Jacob Javorski, a Soviet scientist, defects to America but is then pursued by KGB agents upon arrival on US soil. While the CIA try and get the scientist to safety, they accidentally wander onto a nuclear testing site (as I’m sure CIA field operatives often do). All of the agents are killed when a bomb is dropped nearby, but Javorski survives as a mutated beast. He wanders around trying to kill people, in an area that seems to be very densely populated for a place where nuclear weapons are being tested. Eventually some cops stop him. He dies hugging a rabbit. Fin.

Francis went on to direct two other films: The Skydivers (1963) and Red Zone Cuba (aka Night Train to Mundo Fine) (1966). One could have a genuine argument about which one of these two is worse. The Skydivers is barely a film at all, mostly just consisting of badly shot footage of guys sitting around drinking coffee cut with some stock footage that makes Ed Wood’s use thereof seem Tarkovsky-esque by comparison. Red Zone Cuba is perhaps the most confusing thriller ever made, the plot having something to do with land rights in the old west, the search for tungsten, and the 1961 Bay of Pigs Invasion. I love the fact that it has two different titles and yet neither make any sense whatsoever to the film in question.

So what is the endearing relevance of Mr Francis? A lot people point to Ed Wood movies as the bottom of the cinematic barrel; anyone who has sat through an entire Coleman Francis film, never mind all three, can bear witness to this statement’s falsehood. Also, Wood’s story is a sad one – Ed was a guy who cared very deeply about things, who had something to say but just no voice to say it with. Francis on the other hand simply wanted to make a cheap buck, as near as I can make out anyhow, and so his failure is more instructive and less heart wrenching. Watching something like The Beast of Yucca Flats demonstrates how some things you take for granted, things that are present even in Ed Wood’s worst movies, like the basic idea that a film is meant to either entertain and/or inform its intended audience, isn’t something that comes to every human being automatically. Coleman Francis shows you otherwise. His films are all, seemingly intentionally, pointless. Red Zone Cuba perhaps has a political purpose buried somewhere underneath it all, but it is so ineptly illustrated as to make any search for it redundant. Meanwhile, looking for the underlying meaning of Wood’s films, it is clear that Glen or Glenda is about acceptance of people with alternative lifestyles; Bride of the Monster is about the dangers of people playing God; Plan 9 From Outer Space is about the horrors of mutually assured destruction. None of these tropes are particularly original, except perhaps the theme of Glen or Glenda given when it was produced, but Wood’s films are all trying to communicate something. Coleman’s films don’t even try.

I have to admire Coleman’s ambition, however. You’d think having made The Beast of Yucca Flats and witnessed the genuine torment it causes in most normal human beings would be enough to cause one never to make another film. But no, he made two others, both just as bad as his initial, starring-Tor-Johnson shitfest. I can’t help but take my hat off to the guy.

I should close with a warning here. If reading this has made you in any way wish to seek out the films of the auteur mentioned in this piece, please be advised as to just how horrifically bad the movies described above actually are. If you’re the type of person who thinks The Big Wedding was unbearably unwatchable, you diving into The Beast of Yucca Flats would be the equivalent of someone who gets tipsy off a half of very weak lager shandy gulping down a third of Scotch in one go. If this is the case, please work your way up to Coleman Francis, maybe via Ed Wood. If you can sit through all of Bride of the Monster without chewing off a limb, perhaps you’re ready. I felt the need to put this disclaimer at the close because I don’t want to be responsible for anyone wandering around in a Tor Johnson-esque haze, murmuring, “A man runs. Someone shoots at him” over and over again, their frontal lobes rendered useless by dint of my making Francis Coleman sound appealing.