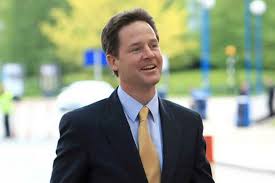 It was announced yesterday that Channel 4 are to produce a one-off, feature length programme to be entitled Coalition, centred on the events surrounding and shortly after the 2010 general election, with Nick Clegg as the main character. There has been plenty of debate around who would portray the Deputy Prime Minister, ranging from the improbable (Colin Firth, Ricky Gervais), to the acceptable (David Morrissey, Benedict Cumberbatch), to the hide-behind-the-sofa-as-a-comedian-attempts-serious-role-but-sort-of-still-plays-it-for-laughs car crash some have suggested may take place (Hugh Dennis or Chris Addison – god help us all).

There has been little speculation thus far on who would play the other key roles. I suggest Damian Lewis with an Elvis-eqsue hair dye for David Cameron; Carrot Top as Danny Alexander, who would no doubt pull off the worst Scottish accent seen on screen since Braveheart; and of course, Chris Huhne as Chris Huhne, completely unconvincingly, something the public will ponder as to whether or not this was an intended effect of the casting on the part of the producers.

A bunch of blokes gathered around a table, arguing the minutiae of fiscal policy does not strike me as a scintillating prospect for televisual entertainment. But beyond this fact, there are a lot of reasons why this being commissioned is very odd indeed.

First off, it’s being penned by James Graham, in what I have to say is a questionable career move. He hasn’t seemed to realise that what made The House work was the fact that it was about politics in an era that was removed enough from our present one so that the characters involved evoked no baggage in most of the populace, while being close enough to feel relevant. This will air while the current coalition of which it takes as its subject is still in government – too soon, man, too soon. At best, the show isn’t a disaster and Graham’s career continues; at worst, he’s type cast as “that guy who writes about when politicians fuck up”. Which is pretty niche, I think you’ll agree.

I also have no idea what Channel 4 are thinking either. Of course I’m going to watch Coalition, as will most of the people I know. That’s because we are all people who work in and around politics and have an unusual (and perhaps even unhealthy) obsession with all things political. But will this really be of mass interest? All I ever hear about is how disengaged people are from Westminster. How does that square with tens of millions of people gathered round the set of a Saturday evening to watch Chris Addison wearing a blonde wig and doing a bad Nick Clegg impression?

On a final note, since this is coming out during a regulated period before an election, shouldn’t it be considered politically sensitive and perhaps fall under Lobbying Bill (formerly PPERA) regulation? Oh wait, I forgot – that doesn’t apply to mass communication put out by third parties. Or it doesn’t sometimes, and applies other times. It’s all quite confusing in the land of political broadcasting. I’m just saying, if you put out a ninety minute movie about Nick Clegg, shortly before polling day, does that not in some way affect the general election result? I have no idea whatsoever, but it’s worth talking about.