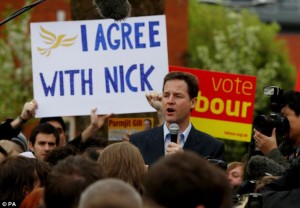 Early-autumn, 1991. Little had changed on the popular music front since the late-80’s, at least if you were living in a semi-post-apocalyptic part of North America at the time. Hair metal and bad synth pop dominated AM radio. It felt like it was going to go on forever, as if pop culture had lost the ability to evolve. Then it all, very suddenly, changed.

A group from Seattle, who called themselves Nirvana, released a song called “Smells Like Teen Spirit”. It sounded a lot like the Pixies, only with heavier guitars and a greater pop sensibility. Nothing all that surprising about that; in 1991, lots of alternative groups were trying new takes on the Pixies sound. What did shock was the public’s reaction to the song, namely to buy it in great numbers and push it to the upper reaches of the charts.

I remember very distinctly the mix of emotions Nirvana breaking big produced in me at the time. I was 18 years of age, going through that whole “who am I? What does life have in store for me?” type existential stuff all those who pass through the invisible boundary between childhood and the adult world experience. I had sort of accepted the fact that the majority of people in the world had shitty taste in music; that, like I mentioned at the top, the bad power ballads were going to be the eternal soundtrack to the western world. So to watch it change so suddenly, to see those who had previously lapped up the music I had loathed now getting down to Cobain and co was very strange indeed. Had the world come round to my way of thinking after years of me feeling alienated from it – just like that? It wasn’t this thought so much as the idea that I might just allow myself to get used to the new order of things, of society being something I could comprehend, and then get slapped in the chops when it turned out instead to be some form of temporary insanity within the sphere of public taste.

As it happened, things went south reasonably quickly. The major labels reacted predictably to the chaos brought on by a sudden and unforeseen shift in musical tastes: they brought out as many clones of the thing that had begot the revolution as they could manage. And so we had to endure many a Nirvana pastiche. Until Kurt Cobain decided to end his life in April of 1994, bringing the era to a tragic close. After that, alternative rock sort of let go of life, even of the Xeroxed one it had by that point. Sure enough, the status quo had reasserted itself.

Late-spring, 2010. Almost twenty years after that trio from the Pacific Northwest took the world by storm. It was a UK general election and it had been decided there was to be, for the first time ever, a set of three “Prime Ministerial debates”. Cameron, Clegg and Brown would go toe to toe in verbal battle. The hype beforehand was around who would come out as the top man: Brown or his challenger for the Number 10 keys. Instead, Nick Clegg, surprisingly to those who had little previous knowledge of the man, emerged from the first debate the clear public favourite by an overwhelming margin.

As a Lib Dem and ardent Clegg supporter, I found the next couple of weeks eerily reminiscent of when Nirvana broke big – had everyone suddenly come around to my way of seeing the world? I didn’t know how I felt about that. I had gotten used to the idea that most people in Britain lined up either with a bunch of syndicalists with nostalgia for the Eastern Bloc or a gaggle of posh boys obsessed with their dislike of all things foreign. That was just the way it was. The possibility that the great re-alignment of British politics, one in which all liberals, previously spread across the British party political system, came together under one banner while the flat Earthers, communists, Europe-bashers, and religious nuts lined up on the other side, seemed almost palpable.

Alas, as you all know too well, it was not to be. In fact, everything feels less liberal than ever, what with UKIP coming on strong. The general election landed like the moment you wake up with the kind of hangover that makes you question whether you need an ambulance or not. The Lib Dems ended up losing five seats. The party was now in government, but Cleggmania was no more, as both sides of the political fence decided our beloved Nick was the perfect scapegoat for why we either couldn’t nationalise all industry or bring the welfare budget down to 50 pence a year.

The question that arises from all of this is: should I look back on the brief window that was “Smells Like Teen Spirit” taking the 80’s synth pads and flushing them down the loo, and Cleggmania, with its hope for a better political tomorrow and, for a fleeting moment, making us think that perhaps the old rules had been cast away, with joyful nostalgia? Or should I fear such times as painful reminders of the essentially conservative nature of the human race? I haven’t decided, and I probably never will.