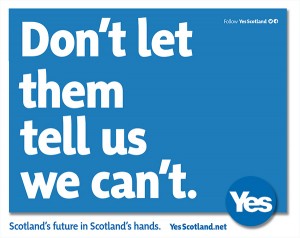 Yesterday I wrote about the Nick Robinson BBC thing, pointing out that I thought it was weird for a bunch of nationalists who will be voting to make their nation an independent one in a few days time to frame a complaint as if they were a bunch of stingy Brits, here to stay. I got a lot of angry comments, which I was obviously expecting. The lamest amongst them were of the “Scotland won’t be independent in three days time, it will take two years to separate”, a technicality that doesn’t get to the heart of the matter: if you want to be on your own, stop blaming the English for everything right now because that boat, if your wishes come true, is about to sail forever.

I looked around social media for other signs of the paranoia that infects the debate in Scotland at present. Apparently, the BBC isn’t just “protecting” Nick Robinson, it is lying about crowd numbers, misquoting people; you name it, Auntie Beeb is up to it. One could joke about this phenomenon until Thursday when the polls close, but there is a very serious side to all of this. The Yes campaign has really been charged by large swathes of people feeling totally left out of the political process, of feeling so detached from decision making they’d be happy to throw all of the pieces in the air and see where they land. The Westminster bubble has never understood this, and I hold my hand up as being as accountable as anyone in this regard. I figured the No side had won the intellectual debate and that was that. Turns out there are enough people who are swayed by other factors to make the result this week far from certain.

People have compared Alex Salmond and Nigel Farage, sometimes fairly but often times not. Salmond, for all his faults, would not pretend to be offended at hearing “foreign accents” on a train into Edinburgh in the morning. But they both have drawn heavily from the well of disaffection with the current political scene, those who run the show. They both play on the “Team Westminster” idea, the narrative that MPs in all parties don’t care about the little people or the problems they face. That there is a secret elite who run everything at the expense of normal folk.

Both the Scotland Yes campaign and UKIP offer simple solutions to the problems that face us; leave the Union in one case, leave the European Union in the other. This is in contrast to other politicians who tell us that the problems are complex and have no easy solutions, only a series of tricky ones. The fact that the problems we face are in fact very complex doesn’t matter; people just want someone to fix everything and fast.

I don’t what to do about this, but I for one am going to stop pretending that it’s a temporary state of affairs. I have dabbled in the “UKIP had their heyday at the Euros and now it’s nothing but decline ahead” story but no longer. I’m not saying that UKIP are going to hold the balance of power with their 50 MPs come 2015 or anything that ridiculous, but I am no longer so sure that they won’t get significant numbers of Britons to vote for them, probably in double digits. It’s time to face facts. A lot of people feel annoyed at the system, annoyed enough to stop thinking practically about the outcome of what they put on a ballot paper anymore. They just want things to change. And fast.