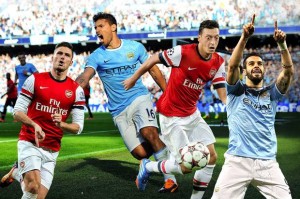 So yes, the game itself. With Arsenal, a club that challenged for the title early on before fading like a lightweight on a bender when the clock strikes half nine, facing Manchester City, the club that won the league by default after Liverpool self-destructed in fascinating fashion, this match has all the hallmarks of a cracker. Except it won’t be. The Charity/Poulan Weed Eater Garden/Community Shield never is. In fact, it’s always about as entertaining as the Third Place match in the World Cup, i.e like watching a bucket of paint do synchronised swimming.

Still, it will be eagerly watched by millions of football fans, cut adrift from their weekend fix for a whole four weeks now. That is what this fixture is truly great for: people watching. The typical male viewer will be drooling a bit, pint held slightly askew, eyes limpid pools of joy, as if he were witnessing the dawn of existence. Watch for it if you’re in a pub tomorrow afternoon. It is the look of an addict deprived of their fix getting a long awaited hit. Only instead of the good stuff, this is watered down, cut with talcum powder rubbish. Beggars, choosers, and all of that however.

Remember when Manchester City were everyone’s second team? Back in the days when they went down a league every season and had players with nicknames like “The Goat” (which was meant affectionately)? They had a sort of 1860 Munich vibe going on, a club who shared a city with one of the world’s megaclubs yet had an indigenous fan base which was always superior (at least according to legend). Hard to imagine now that they’ve become the Chelsea of the north. Well, not quite, but you know what I mean.

So who will win tomorrow? I’ll take Man City to win 2-0. Mostly because Wenger tends to give this match the full credence it deserves, i.e. none whatsoever. Which brings me neatly onto Arsene himself and a pertinent question: why does he keep doing the Arsenal job? He’ll never replicate the “Indestructibles” circa 2004, and even winning the title again seems unlikely, so what is there left to achieve? This, by the way, is not my way of saying that Arsenal should ditch the guy; they remain lucky to have him. With Wenger gone, the depths the north London club would plummet to would make Moyes’ time at United look respectable.

So yes, Manchester City 2 Arsenal 0. Take that as you will. I thought Argentina were going to win the World Cup though, in the interests of transparency and full disclosure. Then again, does anyone actually place bets on the Charity Weed Eater Cup?