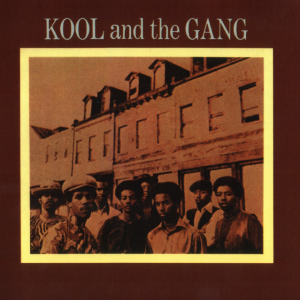 When people hear the name of the band Kool and the Gang, they tend to think of “Celebration”, or perhaps the string of other cheesy disco hits the band produced in the late 70’s and early 80’s. Or they think of that and “Jungle Boogie”, a song that was featured on the “Pulp Fiction” soundtrack, and wonder what the band must have been taking when they seemed to transform from purveyors of synth drowned ballads into a badass funk machine. Of course, the transformation was the other way round: the key piece of information those in the latter camp are unaware of is that this particular group, known mostly for its fromage fare now, was the coolest band in the world during the early 1970’s.

Their first eponymous album is a testament to this. Sadly, it is hard to get hold of in its entirety, even in this digital download age (it is not currently available through Amazon in MP3 format, but you can get a second hand CD copy for a mere £31.03). It is easily one of the funkiest albums ever made and totally brilliant besides, a real ten out of ten. Bits of it are thankfully accessible, like the singles “Give It Up” and “Let the Music Take Your Mind”. The former is one of the two or three funkiest songs ever recorded, with a drum and bass interplay that will make you feel like you just downed a martini in one go. The latter has one of the ten coolest funk breaks on record, meaning it has been used many times by hip hop acts.

Actually, trawling through Kool and the Gang’s early albums will be a mission of near nostalgia for avid hip hop fans, as the band’s early works are amongst the most sampled songs of all time. Indeed the Wikipedia entry lists 39 hip hop tracks that have sampled the debut album alone – and looking at it, I can think of at least 10 tunes off the top of my head they haven’t mentioned.

In the mid-70’s, the band’s fortunes began to wane, as they did for most funk acts. There were only two real options facing them: give up completely, or go disco. Most chose the latter option, and the legacy of this is not pretty. It’s what I like to call the Rod Stewart syndrome: had Kool and the Gang disbanded in 1976, they would have been enshrined as icons of coolness across the generations. Instead, they are now they are remembered simply as those guys who recorded “Celebration” forever more.

Worse yet, as cheese as the disco period was, at least some the tunes were mildly okay. Kool and the Gang’s 80’s output is truly horrific as anyone who recalls any portion of “Rosanna” will testify to. They really ate that 80’s shitburger for breakfast, tragically.

I however choose to remember the band in their funky heyday. Any of their albums pre-1975 are brilliant, but start with the first one, if you can get your hands on it. Otherwise, The Best of Kool and the Gang 1969 – 1976 is a great primer (make sure you’re not accidentally buying the 1979 – 1987 Best Of, which is terrible). Trust me, you won’t regret discovering the real Kool and the Gang.