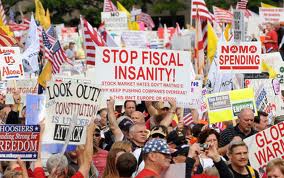 There are two recent events that in most respects have little in common, having arisen in different countries and been spurred on by immediate events that bear little relation to each other. I refer to the Douglas Carswell defection to UKIP and the release of a poll in France that demonstrates if a presidential election were held tomorrow, Marine Le Pen would win it. What unites them is a long-term trend, one that should be of worry to both centre-right and centre-left, towards an erosion of the centre-right altogether accompanied by a strengthening of the far right.

I should point out here that Douglas Carswell and Marine Le Pen bear little in common specifically; Carswell is a strange mix of things, a Eurosceptic who is an internationalist, a climate change sceptic who puts most right-on lefties to shame with his desire to shake up the constitution; Le Pen is a much more traditional far right figure. But both represent a failure of the centre-right in their respective countries to present people in Europe with a programme, a set of policies, or indeed a vision they can buy into.

How did this happen? How did we get to a point where UKIP are on the verge of Westminster representation and the Front National in with a shot of running France? Part of it is a problem around what the centre-right is actually about and what it isn’t. Throughout Europe, and Britain is no exception, the centre-right has largely abandoned social conservatism. That has made it more attractive to liberals but less so to those whose whole attraction to conservatism was to be mostly found on social issues, culture wars, call them what you will. This should have been thought about more carefully by the centre-right; they should have seen this problem coming and had a plan for it. Instead, they have largely panicked and tried to look both ways, liberal and socially conservative, internationalist and protectionist, all at the same time. See Cameron’s Europe policy as a great example of this; it is a fudge, and everyone knows it. So neither side ends up happy and the far right takes on a sheen previously thought impossible as a result, mostly by being seen to have an easily understood position.

I’ve limited this to Europe unfairly as well; it all began in the US after all, with the Tea Party. The Tea Party actually started out as a libertarian movement, one that was annoyed that the Republicans had become so focused on culture wars and the religious right while ignoring what they saw as the centre-right’s defining purpose: fiscal restraint. Looking at the budget deficits of the George W Bush administration, it’s not hard to figure out where they drew their initial inspiration. However, the Tea Party soon became almost the exact opposite of what it started out as; meant to be a means of making the Republicans “sensible again”, it soon became a vehicle for pushing the Republicans even more to the loony right. In this new Tea Party, social conservatism wasn’t to be brushed aside for fiscal concerns – it was to gain even greater importance. And the urge for fiscal restraint and the idea of balancing the books became a pledge never to raise taxes ever again for any reason, hardly a sensible fiscal plan if eliminating debt is your overriding concern.

UKIP has played out along the same lines, albeit less severely. The libertarian idea started out as a central plank of the whole project, only to be brushed aside when it became clear that ex-BNP voters would flock to them in droves if only the flat tax shtick was dropped. And it duly was.

So how does the centre-right regain its gusto? As a liberal, I may not be best placed to dole out advice, but I’ll give it a go. I think its strongest card is economic reliability, followed closely by an aversion towards big, radical change. The Tories dominated the 20th century in Britain simply by being the steady hand at the wheel. By being the ones who weren’t going to put forward anything too potentially divisive. Thatcher changed all of that and now the Tories seemingly have no way back to their previous position. The desire on many a Conservative’s part to be out of the EU is a great example of this. Nothing screams big, radical change like tearing up most of your bilateral treaties and doing something completely unprecedented. Just because it’s populist doesn’t mean the Tories jumping all over it will result in the party becoming more popular; despite all of Cameron’s throws to the Eurosceptic wing of the party, the UKIP phenomenon only seems to grow ever stronger.

So the Tories, the UMP and the Republicans should rediscover the idea of being sensible and safe. The Republicans have been taken over by religious fanatics and need to find some way of becoming seen as pro-rationality again, as opposed to a bunch of weirdos who think there’s no need for fiscal policies that make sense because Jesus will be returning to end the world at any moment. The UMP need to widen their base of support by being more liberal, less protectionist, while understanding that they are in a country with such a high degree of social services, any attempt at large scale repealing of said will be seen as unpopular. With Hollande’s ratings dropping into la salle de bain, it is time to take the fight to Le Pen and the Front for real.

In Britain, the Tories need to understand what it is about Thatcher’s legacy people who might vote for them otherwise really don’t like. There is a narrative that undoubtedly exists that thwarts all of the Conservative’s best-laid electoral plans; people though the Tories stood for continuity, for community, and it turned out in the end they were actually all about a particularly harsh version of neoliberalism. If Cameron believes Britain’s best option is remaining in the EU, albeit with a few reforms along the way, he needs to make the case for exactly why that is, as well as how that fits into his conservative world view. Otherwise, people on the Right will buy into UKIP’s narrative that it’s all a Tory con in ever greater numbers.