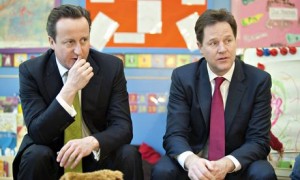 There’s a new item in the Guardian today about David Cameron calling for an end to coalition in-fighting. There has been a lot of chin wagging about a difference in approach to Free Schools policy and the Prime Minister has finally stepped in. Some in the Tory ranks will say this is unneeded; if the Lib Dems want to walk at this stage, so much the better. Differentiation opportunities, all that sort of thing, plus the chance to be rid of the “yellow peril”. But I suspect Cameron knows that he might need the Lib Dems again post-2015. And if that’s what he is thinking, then I happen to agree with him.

The Tories face a huge mountain in order to obtain a majority after the next general election. As we saw in 2010, there are huge swathes of the country where they simply cannot get seats, mostly due to Thatcher related baggage. Impedimentia, I hasten to add, they have done nothing to rid themselves of during the course of the parliament we currently reside in. So the question has to be asked: even if the Tories get the vote share, where are these extra seats going to come from?

The greatest irony of British politics at the moment is that the referendum all of the Lib Dem hating and bating Tory backbenchers crave more than anything may probably only happen as a result of the Lib Dems. If there is another hung parliament, as is seeming increasingly likely, and the Tories are the largest party, which is also appearing to be more and more probable, then the only way the In/Out happens is if the Lib Dems sign up to it in a coalition deal. If there is a minority administration, it’s definitely off. Cameron seems desperate to be Prime Minister for another term, and equally determined that his legacy be he as the one who finally solved the Tories’ Europe problem by creating the In/Out referendum and – whatever he may say on BBC sofas now and in future – keeping Britain in the EU.

Given all this, Cameron needs to hold the Lib Dems at least somewhat close, at least close enough to keep the possibility of Coalition 2.0 open. To do otherwise would be suicide for everything he hopes to achieve. Problem is, publicly he has to seem to disown the Lib Dems and indeed the whole coalition project. How the Prime Minister manages to walk this tightrope (or doesn’t as the case may be) between now and May 2015 will be one of the things to watch for over the next eleven and a half months.

The other interesting thing to watch for will be more inter-coalition spats as election days nears. Again, the balance for both parties between differentiation and looking towards another possible deal will be difficult to maintain. But I would argue, it’s much more important for the Tories; I think in the end, they have more to lose.