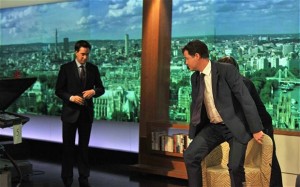 Nick Clegg revealed in a very recent BBC documentary that he would be open to working with Labour in a coalition should the electoral maths point in this direction. On the surface of it, this doesn’t even technically qualify as news. Clegg has said many times that he wishes to keep his party equidistant from Labour and the Conservatives, and that in the event of another hung parliament it would be up to the voters to decide which party came out on top. But its reporting as news has made it so, and the rebuttals from Labour have come thick and fast; some predictable, some noteworthy.

The word from Ed Miliband’s office has been what you would have expected. Nick can take a hike, we’ll never work with those Tory enablers, etc, etc, blah, blah. Miliband has to say this. To speak of anything else in public is to publicly concede the possibility of a parliamentary majority – electoral suicide before a general election. But the Labour blogs have been aflame, such as Labour List’s Mark Ferguson writing about how the response from the Labour front bench has been somehow definitive and there will now not be Lib-Lab coalition talks post 2015, whatever the result of the election. Ferguson also seems to believe that Lib Dem voters will flock uniformly to Labour, without considering just how many of these people will either stay at home (likely in a lot of cases), vote UKIP (God forbid) or even, dare I say it, vote Lib Dem again. Much talk has gone on during this parliament about how little Tory hardline backbenchers such as Peter Bone seem able to comprehend the implications of a party being the largest in a hung parliament. I would now say that a great deal of folks in the Labour party are struggling with this as well.

What will determine what happens after the 2015 general election, and who climbs into bed with whom, will be entirely decided by two factors alone: the result of the election and political expedience. If Labour were the biggest party in a hung parliament after 2015, and for whatever reason either could not or would not form a coalition with the Lib Dems, then the following would happen. Labour would form a minority government. Due to the Fixed Term Parliament Act they would not be able to call another election at their discretion. That would be in the hands of the opposition parties, effectively. In the meantime, the Lib Dems would hold enormous power. Labour would have to go to them for every piece of legislation, Bill by Bill, asking the Lib Dems for support. Politically, it would always be in the Lib Dems interests to say no, to add to the “Failing Miliband” narrative that would unquestionably develop quickly. The Lib Dems and the Tories could sit back, wait for Labour’s poll ratings to completely tank and then call the whole thing off. It would be a complete disaster for the Labour party.

Ed Miliband is unquestionably aware of this. Which is why he will continue saying that he is only thinking about a majority and any talk of coalitions is foolhardy and completely unnecessary; until he wakes up on May 8th with some tough decisions to make, and like any talented politician, will do what is actually in the long term interests of his party and not the whim of overly idealistic activists.