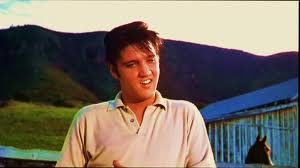 You may retort by claiming they are just a bolt-on to the musical category, but you’d be wrong. The Elvis Movie is a genre, completely self-contained, unto itself. Some films that Elvis appeared in, incidentally, do not fall into the category. Something like Elvis: That’s the Way It Is, a documentary about Elvis’ return to the stage in the early 70’s, is not an Elvis Movie. Nor in my opinion is something like Flaming Star, a narrative feature starring Elvis. Flaming Star is a western that just happens to have Elvis in it (whereas Charro!, although ostensibly a western, is an Elvis Movie, despite there being no musical interludes). You could have cast someone else as the lead in Flaming Star (and it’s sad they didn’t; it would be one of the great westerns of all time had Paul Newman or somebody played the lead) and it would be pretty much the same film, only slightly better.

You may or may not like Elvis’ music. Me, I have the opposite take on him to the one that has become gold standard in the world of popular culture – I like fat, 70’s, losing it Elvis more than any other period of his. When he wanted the world to go away and it just wouldn’t; he was too big for that, both literally and metaphorically. Second in ranking, I like the 60’s Elvis of his film career. The 50’s Elvis, other than the Sun stuff, is kind of dull to me.

So what are the crucial elements that make up the Elvis Movie? I’ve boiled it down to the genre’s essentials:

1. The musical numbers must not advance the plot or provide character insight

In the musical genre, the songs are there to both entertain in their own right and help the story along. This almost never takes place in an Elvis Movie. The song must be a random interlude. Best example of this would be in Clambake, when Elvis and the guy he has traded lives with (don’t ask) are walking back from the beach towards the hotel. Elvis sees some kids in a playground and stops the conversation with his friend dead, runs over to the children, and begins singing a song called “Confidence”, which I should add here is a complete rip-off of “High Hopes”. Once the song is complete, Elvis walks back over to his friend and the two of them pick up their conversation exactly where they left off. You could edit the song out of the film completely and be left with only a bad cut for evidence.

2. There must be, at bare minimum, at least one example of jaw dropping nonsense out of nowhere

Shelley Fabares holding a sign saying “I Am Evil” for no reason in Girl Happy. A dream sequence involving a guy in a dog suit in Live a Little, Love a Little. Elvis suddenly signing a song called “Dog’s Life” to a helicopter filled with canines while piloting said vessel in Paradise, Hawaiian Style. The homoerotic wrestling that goes on unnecessarily long, involving Elvis near the start of Stay Away, Joe.

The character that Elvis plays, who is essentially just a version of Elvis had he not become a rock star but instead had been blessed with supernaturally good luck, can only hold one of the following professions: race car driver, soldier, leisure industry professional, cowboy, singer or at a push, journalist. Rare exceptions are allowed, so long as the believability factor is extremely low (Elvis as right on ghetto doctor in Change of Habit being the perfect example)

4. A very lame antagonist who is easily outmanoeuvred

All of the bad guys in Elvis Movies are pushovers. Elvis defeats almost all of them without even trying to (he’s usually focused on getting the girl). Like Wesley in Girls! Girls Girls!, who makes moves on Elvis’s girl, fails, retaliates by taking away Elvis’ boat, feels bad and gives it back. Or the champion diver schmuck from Fun in Acapulco, who dares Elvis to take a plunge off a cliff, then once Elvis performs this stunt, diverboy loses all animosity for our hero. These guys should not have Darth Vader unduly worried.

All right fine, you say, thanks for the outline, but what’s so great about Elvis Movies then? What makes them essential? That’s an easy one. If you ever need to take your brain elsewhere, to trip out sans chemical aid, an Elvis Movie is always your best bet. You will not see the world the same way at the end of an Elvis Movie, if only due to your frontal lobe having been crushed with boredom. They are their own thing, a rare commodity. Whatever you think about his tunes, try out of the movies. Start with Paradise, Hawaiian Style; avoid The Trouble With Girls and Kissin’ Cousins altogether.