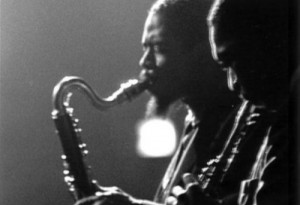 I was depressed a lot when I was younger. A lot of this had to do with the fact that I was living somewhere I loathed, wanted to escape from, but did not yet know how. I filled a lot of space listening to music, and when I was really down I would turn to Eric Dolphy. I would put on my Walkman, stuffed with the cassette tape I’d recorded the records from, and stroll aimlessly around one of the industrial slag heaps near where I grew up. I’d listen to Eric wail his ass off and then eventually come home feeling just a tiny bit better. More to the point, Dolphy’s music made me feel a bit more hopeful, hopeful that one day I’d have a better life, hopeful that somewhere in the world there were like-minded souls with whom I would argue the relative merits of Out There over Out to Lunch (actually, this last aim remains unfulfilled, sadly).

I’m now five years older than Dolphy was when he died in 1964. His death in Berlin was needless, tragic. He was an undiagnosed diabetic, and when he went into insulin shock and slipped from there into a coma, the West German doctors who were attending at the hospital where Eric was brought in assumed, because he was a jazz musician, that he had taken too many drugs. Precious time was lost as a result; time Eric Dolphy didn’t have to spare.

His passing harkened the death throes of jazz as a living art form, with more mortalities to come in the following years. Too many creative voices were lost in too short a time and by the middle of the following decade jazz was already what it remains today – a museum piece.

The next big loss after Dolphy was Coltrane. He died in 1967 from liver disease, most likely the result of a serious drug addiction he had fought throughout the 1950s but had kicked well before his untimely demise. ‘Trane achieved a fame far beyond Dolphy’s; while Eric remains fairly obscure, Coltrane is known, in name at least, by a lot of people who have never bought a jazz record in their lives. This was possibly because he played with all the greats, from Miles Davis to Thelonious Monk, possibly because his name has been adopted into Hollywood movies as a short-cut to the hipster early 60’s.

Few know, even amongst those who own a copy of Blue Train or Giant Steps, just how extreme Coltrane’s music became near the end of his life. A lot of it wasn’t released to the record buying public until after he had passed – and it’s no wonder. Sufficed to say that Live in Japan won’t be playing in the background of any Caffe Nero in the near future, with its shrieking solos and beyond free jazz structures. People who don’t like jazz often charge even quite melodic bebop with “sounding like noise”; bits of Coltrane’s late period sound cacophonous enough, even to the fully initiated, to qualify as almost pure racket.

This direction of Coltrane’s was at least partly inspired by a young tenor saxophonist who had moved from his hometown of Cleveland to Sweden, and from there to New York City in 1963, named Albert Ayler. Ayler’s take on music was beyond Ornette Coleman, or indeed any of the progenitors of free jazz. Some refused to deem it worthy of being called jazz at all. And it’s no wonder – My Name is Albert Ayler is the Never Mind the Bollocks of jazz. Like late ‘Trane, it requires some patience at first to get into. But Ayler’s music was truly unique.

It wasn’t much of a surprise that Ayler found next to no commercial success with the path he chose. Coltrane at least was very well established and had a large fan base when he decided to experiment; for a newbie, peddling a sound beyond free jazz, even in the late 60’s, wasn’t going to be easy. Under pressure from the various labels he worked with he tried a more commercial sound, but even that didn’t work. He tried Europe again but ran up against it, even there. In November 1970, Albert Ayler was found dead, picked out of the East River by police, a presumed suicide.

Ayler’s death marked the end of 60’s jazz and indeed the progression of the whole musical form itself. The last possible permutation on the style, fusion, was discovered by Miles Davis the year before and formalised on Bitches Brew, released in January of 1970. Jazz had nowhere left to go – and more importantly, no one left alive to lead it anywhere.

Thinking back to the late 1960’s reminds us of a time when musical giants walked the Earth, people so talented it was actually frightening. With the whole culture having died within a few short years of these great men’s departures from this plane, it is now impossible to imagine another Dolphy or Coltrane possibly emerging. The world is a worse place for it. But at least it’s easy to find Far Cry and Spiritual Unity online, so I suppose every era has its upsides.