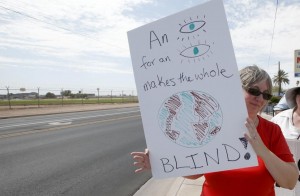 Yesterday, a man named Joseph Wood was killed by the state of Arizona for the crime of double murder. This in and of itself is not newsworthy; it is the fact that the execution appears to have gone slightly wrong, causing Mr Wood unintentional suffering that is of note. The death row inmate apparently choked for two hours in what some said appeared to be horrible pain (although there are conflicting accounts on this). The manner in which he was “put down” is supposed to take fifteen minutes and be agony free.

I would like to be able to say that this incident will surely open up a new debate on the use of the death penalty in the USA, but this is sadly unlikely. As we live in an age where politicians are usually mere reflections of the populace’s opinions as opposed to leaders on the major discussions of the day, the statement from the Arizona state governor, Jan Brewer, is instructive. “By eyewitness and medical accounts he did not suffer. This is in stark comparison to the gruesome, vicious suffering that he inflicted on his two victims, and the lifetime of suffering he has caused their family.” So in other words, he didn’t suffer, but even if he did, the bastard deserved it.

I haven’t looked at the details of Joseph Wood’s crimes and frankly have no desire to. But it seems to me that if a person has the right to death by the state that is free of suffering, then that should be adhered to. I use the words “death by the state” for purpose here, since I am against the death penalty in the strongest way possible and it is the “by the state” bit that forms a huge part of my antipathy towards the method of punishment. I am somewhat of a classical liberal (note to American readers: this means something very different than “liberal” means in America. Let’s just say I am definitely not a socialist, or anything close to it), and as someone who regards the state’s intrusion into places it does not belong as fundamentally incorrect, I have great difficulty with any government executing its own citizens. In other words, I am against the death penalty because I believe it is beyond the remit of any state to murder its own citizens directly, whatever the supposed justification.

This is one of the reasons I find the debate around the death penalty in America both fascinating and exasperating at the same time. Because the people who seem to support it most strongly are the same people who are busy arguing that the state has too much power. How much authority could you possibly grant any institution beyond the ability to legally take away people’s lives? Liberals in America often trot out the pro-life/pro-death penalty hypocrisy that exists amongst this same demographic, but I actually understand that one – if you have a rigid Manichean viewpoint on the world, it’s easy to see why foetuses must live and murderers must die. One group is completely innocent, the other entirely evil. It’s the “state must stay out of people’s lives, other than to kill them if they go off the rails” thing that I find impossible to absorb.

Unfortunately, as the governor of Arizona’s statement in the wake of the latest death penalty botch job (there was another one in Oklahoma earlier this year, a situation similar to that as faced by Mr Wood) aptly demonstrated, the end to the death penalty throughout the United States is not on the immediate horizon. If only small state conservatives in America could see the faults in their own arguments, perhaps the most powerful country on Earth could finally end this outdated practice and join the rest of us in the 21st century.