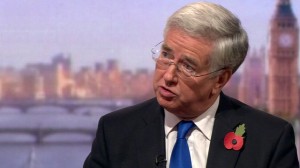 The Secretary of State for Defence, Michael Fallon, used some very strong language in an interview given to BBC Radio 5 Live over the weekend, suggesting that English towns were being “swamped” by immigrants and in fact were “under siege”. After a confusing series of statements from Number 10, Fallon has today apologised.

“I misspoke yesterday; I used words I wouldn’t normally have used. I was a little careless in the words I used yesterday. I accept that,” he told the BBC.

His climb down, and indeed the muddled Tory reaction to the EU and immigration debate over the past few days, may have partially been motivated by UKIP’s immigration spokesman, Steven Woolfe, making hay out of the whole thing by describing Fallon’s words as “intemperate” in their language, adding almost poetically: “Can you imagine what would have been said if we had said that?”

What the Tories, and indeed to a certain extent Labour, don’t understand about Farage and his appeal is that when he talks about Europe and immigration his story is logically consistent. I disagree with it fundamentally myself, and the conclusions it comes to I believe are completely the wrong ones. But they make coherent sense when you take certain illiberal things for granted. Britain’s problems are down to immigration; immigration cannot be properly controlled by the British government until the country withdraws from the EU. That’s a simple story, an easy one for people to get. You can hate it, and I do, but you cannot argue that it isn’t easily digestible.

Meanwhile, take the Tories’ tortured thinking on the EU. Yes, the country should have a say on whether to remain in or not. Cameron is going to renegotiate some deal that corrects all of the flaws of the EU single-handedly. Not because he necessarily wants to stay in, mind you, he just wants to see what he gets and then decide. After which he may support the stay in side. Or the get out side. Either way, the country gets a decision. Based mostly in the end on what David Cameron thinks of the deal he gets.

Cameron needed to have as part of his Bloomberg speech, the one in which he pledged to hold a referendum in 2017, an explanation as to why he thinks Britain should remain in. But he was too scared to do that, given the internal Conservative party rifts on the topic. And he thought the speech would kill UKIP anyhow. Sufficed to say, that didn’t occur. Now he is where he is; the Tories are where they are, getting told off by UKIP for inciting xenophobic sentiment.

What this whole episode demonstrates is the extent to which the leading politicians of our day are running scared from the public. Normally, this sort of thing is described as a good thing; democracy in action. But somehow, it’s not working out that way. Instead, we seem to have a large number of politicians who are scared to stand up for anything, lest it blows up in their face. So we get them treading water, trying to figure out what we all want to hear next. The public gets annoyed about this – anti-political feeling goes up a notch, making the politicians even more cautious about saying what they really think. And on it seems to go, a horrible negative feedback loop.

I don’t know a way out of this. It feels like something has to give at some point; yet we have a political system specifically designed for not dealing with this sort of thing. No party can really come out nowhere within the Westminster system, not even UKIP, whatever their supporters think. First Past the Post won’t allow for it.

It is the great question of our age: how does the political class reconnect with the people at large when so much fear and mistrust has built up on both sides of the equation?