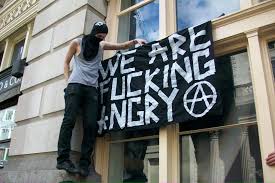 It is often assumed that the polar opposites on the political spectrum are the Far-right and the Far-left. In my experience, this just isn’t so; those at the political extremes tend to have a lot more in common than you might at first think. Here are the similarities they share.

Anger at the world

Both ends of political extremism are fuelled greatly by rage. A feeling emanating from people who gravitate to the farthermost political edges that the reason they are unhappy, or poor, or alone or whatever it is they don’t like about their lives, has to do with what is wrong with the world – and not with themselves. Now, people are often dealt a bad hand, don’t get me wrong. I just don’t think claiming 9/11 was an inside job, or indulging in immigrant bashing is a great way of righting that wrong.

At first glance, the things that the Far-right are angry at seem very different from the things that rile up the Far-left, but that’s mostly surface. For instance, it doesn’t take much to get the Far-left upset about immigration – you just need to point them in the direction of rich, or even middle class people who have come to our shores. Similarly, it’s easy to get the Far-right upset about cuts – so long as they affect parts of society (such as pensioners) that they care about or feel close to.

Within both the Centre-left and Centre-right there is a presumption that policy ideas, direction of government, manifestos, all need to correspond with reality. In other words, they need to be actually achievable. Both Far-left and Far-right parties tend to not bother with this at all. The Far-right in Britain says we need to be out of the European Union with no idea what happens next after all of our bilateral treaties are ripped to shreds; the Far-left still cannot accept that tax revenues are smaller than they used to be, and indeed will be smaller for some time to come, and thus have no vision for what social democracy in an austerity climate might look like. Ideological purity always trumps everything, including common sense.

Both the Far-left and Far-right talk a lot about the “elites” who run everything, those at the top of the pile who exclude people such as themselves from well, everything it seems. Now, I want to be clear that just because you engage in a little anti-politics you obviously are not automatically on the Far-left or the Far-right – if that was the case, a very large portion of the British public would be considered on the political extremes. But most people’s feeling of distance from politics is one of thinking that the politicians are out of touch and that Westminster is dysfunctional. The Far-left and Far-right both think that the “elites” are actively conspiring against them or at least their group of people, however they choose to define that, in a personal and malicious way.

This involves conspiracy theories galore. I alluded to the 9/11 inside job people earlier, and although the buy-in to this comes mostly from the Far-left, there is a lot of traction for it on the Far-right as well, particularly in America.

Both of the two groupings like lumping things together that are meant to be “anti-establishment”, which is where the real clusterfuck between Far-left and Far-right occurs. At the recent Russell Brand inspired rallies in central London, there was a kid holding an anarchy sign in one hand and an anti-cuts/anti-austerity placard in the other. He was obviously oblivious to the fact that anarchy represents austerity super-plus; anarchy means no government whatsoever, so I would imagine many cuts would be involved should Britain take up this ideology, as this kid did with at least one of his hands advocate. Anarchy and communism are, in practice, the exact opposite of each other: anarchy = no government, communism = the government controls and runs absolutely everything. And yet how many times do we see them thrown in a pot together thoughtlessly by protesters.

It is weirdly usual to see people who start out as militant communists become hardened, anti-immigrant conservatives. Few become liberals. I despair sometimes.