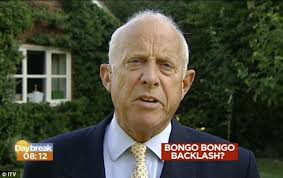 My favourite Godfrey Bloom moment of all time, before today’s announcement that he has stepped down as UKIP’s whatever-the-hell-he-was-it’s-not-important-enough-to-bother-googling, was an appearance he made on BBC’s Have I Got News For You. A sort of “Godfrey’s greatest hits” reel was playing as part of a bit, you know all the classics: Bongo Bongo Land, the “sluts” comment, hitting Michael Crick with a rolled up copy of UKIP’s manifesto. After it played, the camera cut back to Godfrey who looked almost supernaturally pleased with himself. He wore on his face the exact same look a toddler has while being told off for the gigantic poo he’s just deposited in his sibling’s bed. Whenever I’m asked to free associate “UKIP”, that childish face of Godfrey’s on the BBC is the very first thing that springs to mind.

But as I say, he has told the world this morning that he’s left UKIP. And his parting words are, not all that surprisingly, the most cogent things that have ever fell from his mouth. HIs interview with the LBC mostly took the shape of a warning for the newly converted Douglas Carswell:

He goes on to say in the same interview:

“It seems to be drifting towards the politically correct mainstream like everyone else.”

This stuff will almost be certainly treated the same way everything else Godfrey has ever said has been, i.e. with sniggering contempt. But this time, as I say, he actually has a point. The greatest problem facing UKIP as they go forward is how to reconcile what is fast becoming two mutually exclusive campaigning strategies: one, the Farage model, which is just say whatever it is will get the party elected, and two the Carswell model, which is about libertarian ideological purity. At some point these two are going to rub up against each other, hard. I can see Carswell and Farage falling out sooner rather than later. The dynamics of this will be interesting to watch: Farage as party leader, but Carswell as lone MP.

Perhaps one way of looking at today’s announcement from Godfrey Bloom is that by shedding people like him, UKIP is “maturing”. Maybe so, but what this means in actuality is that UKIP are becoming just like every other party – a real problem when a big part of their unique selling point is that they are precisely not like every other party. They are not politically correct; they are an insurgent force; they tell the truth and are straight up with people, unlike the Westminster parties (or should I say now that Carswell wears a purple tie, the other Westminster parties) who just sell you spin. This is the essence of UKIP messaging.

If you are after a brilliant example of Westminster style spin, watch a party that campaigns, nearly successfully I might add, in a Labour seat on the idea that they are the only party who will save the NHS, on the same day an MP is elected from the same party having gone on record many times as saying he would like to abolish the NHS altogether. That’s some spin. And that party is, as I’m sure you already are aware, UKIP.

In the meantime, I’m going to hunt down that Have I Got News For You clip on YouTube and think back to the good old days when we all thought UKIP were going to fade away after the Euros. Pleasant memories.