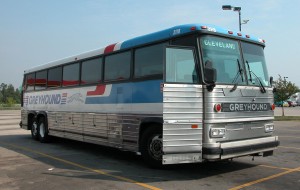 I had a fair few journeys on a Greyhound when I was in my youth, across the great expanse that is the United States of America. Taking a Greyhound coach is far and away the cheapest way of getting around America, so cheap that when I look back on it I don’t really understand how the company managed to ever turn a profit. Given how inexpensive it was to “ride the Hound”, as it was colloquially put, you ran into many different people living on the very edge of civilisation whilst on board.

I recall once stopping off at a McDonald’s in rural Wisconsin. Your only chance to eat when you were riding the Hound was at one of the fast food restaurants the coach would make a pit stop at during the often incredible journey times (I’ve spent three straight days on board at a stretch, and that didn’t even cover half the country). I wasn’t hungry and I had packed provisions anyhow (I was a pro by this stage), so instead I decided to have a chat with the driver. When we had pulled out of Seattle, a very strange incident, even by Greyhound standards, had meant the coach had to be stopped briefly, roadside. Two very corpulent individuals, a man and a woman, were having a fight. And I do mean, a physical fight. And the guy was getting his ass kicked.

“You’re killing me, you bitch!” he shouted as the coach finally pulled over, the state troopers having been called in. It took four of them to haul the obese, violent woman off.

“I’m on crack!” she shouted with gusto as the state troopers finally managed to get her over generous behind out of the coach doorway.

So there we were, the driver and I the only ones left aboard, in the middle of Wisconsin on a cold day. I tried to break the ice with a discussion about the large person related melee.

“The problem is, it’s always the n****rs causing trouble,” the driver said to me. I should clarify, just for the record, that the driver was himself black. I wasn’t really sure what the right response to this colourful verbal offering was supposed to be, so I just decided to exit the coach myself and brave the fast food without a further word to the self-applying racist coach handler.

The worst place I ever visited on my Hound adventures was Fargo, North Dakota. Not enough has been written about what a hole the place is. As I exited the coach station, knowing I was marooned in the town for the next three hours due to some sort of coach malfunction, I was met with a neon sign in front of me that read:

The coach station is usually in the worst part of town, so I didn’t think much of it. Until I walked around the whole of central Fargo looking for a place that didn’t make my skin crawl and came up empty. It was the first American town I’d ever been to in which the coach station was the highlight.

Eventually I came across a porn theatre. It was showing four features. I scanned the titles and realised that three of the four “movies” being shown at the establishment were homosexual in nature. This struck me as weird given the conservatism of where I was (North Dakota is, as you might imagine, a solidly red state), and Americans’ generally retro reaction to anything gay. But I had nothing else to do, so I asked the guy working the counter of the theatre about why there were three gay films and one straight. I was a little scared of the bloke (he had a tattoo on his right shoulder of the Confederate flag) but it was too good a possibility for a little amateur sociology to miss.

“You think there ought to be more then, huh?” he said as I asked him about it. Clearly, he thought I was gay. I don’t blame him for making the assumption; despite having spent the prior two days on a Greyhound coach, I still looked like I’d stepped out of a men’s catalogue when put next to the male denizens of Fargo, and people in North Dakota tend to make assumptions about chaps that look like they’ve ironed their shirt.

“No, I’m straight,” I felt given the situation, it might be advantageous to point this out, “I’m just really curious, that’s all.”

He narrowed his already tiny eyes at me, making him look almost like a mole.

“Look, man, I’m from out of town. I was on a Hound, I’m now wandering around looking for something to do, I came upon your place of business and so I’m just wondering about your seventy-five percent ratio of gay to straight motion pictures. Not for any reason, just ‘cause.”

This seemed to calm him down enough to release the requested information.

“If it were up to me, I’d be showing homo movies in all four of my rooms. But the police would shut me down if I did, pronto. So I gotta show one regular man and woman humpin’ film just to keep the law off my tail. Even though no one goes to see that one.”

As he said me this last line, I noticed a steady stream of middle-aged guys heading into the place, none of them interested in the token straight feature. Most of them were wearing wedding bands. Midwest America, in a nutshell, folks; the results of repression well noted.

I found a Denny’s to eat in (a popular American chain restaurant), as by this point starvation had finally kicked in.

“What can I get you, sweetcakes?”

The waitress had a beehive hairdo. This was in the mid-1990’s, when such things were weirdly out of date even in Fargo.

“Two Moons Over My Hammy, please.”

I found myself suddenly so hungry I could barely breathe. I had walked an incredible amount, and could not recall the last thing I’d eaten since Seattle. I looked over at the table adjacent, where a man in his early-thirties was with his son. The kid was complaining about his eggs being too runny. His dad patted him on the head, telling him to eat up, that there are kids in Africa who would love to have them there eggs, sitting there in front of their eyes like that. It was at this point that three guys who’d been talking together on the coach spotted me and invited themselves onto my table. I wasn’t really up for company, having walked around the whole of Fargo and slightly expended myself. But there wasn’t anything I could really do about the situation other than to be as sociable as I could. The nicest of the bunch was actually a fellow Canuck, a Native who had joined the US army recently (I found out that day that Native North Americans can join either the Canadian or American army if they so choose, regardless of which country they were born in, owing to old agreements on the matter).

When the Hound set off from Fargo, we were joined by a bunch of very drunk frat boys. From the conversation I gathered they were students at the University of Minnesota who had, for reasons I have still yet to fathom, taken a weekend in North Dakota together. They began harassing a few of the other passengers around them, sticking to those they figured would not give them any hassle back. They particularly honed in on a large group of Amish people who were sat near them (you actually see a lot of Amish on Greyhound journeys). It was really awful to witness, these people who weren’t allowed to stand up for themselves due to their vows of peace being forced to listen to jokes about incest from a bunch of spoilt, middle class pricks.

“That one looks like a goddamn science experiment,” is the only specific insult I can remember.

Then, two large black gentlemen got up from the back of the coach where they had been sitting, and walked right up to the frat boys with clear intent. As they did so, the collegians all shut up and stared with fear at the approaching menace.

“You dickheads say one more insulting thing to the fucking Amish, my man and I here will personally kick the living shit out of you, right here on this bus, while it’s still moving. Are we clear?”

The whole of the bus, apart from the boys from Minnesota who had just been put in their place, and the Amish people themselves, cheered loudly at this. Not only did the frat boys not issue another insult to the Amish grouping, they said not another word to each other for the whole of the eight odd hours it took to get to Minneapolis.

There you have it: the oppressed of America, looking out for one another. It was almost enough to make the trip to Fargo worth it, just to have borne witness. Almost.