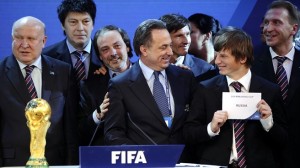 There is a growing call from several sectors, including Republican senators in Washington and several Ivy League scholars (so mostly America, admittedly), to have Russia booted out of the upcoming football World Cup this summer in Brazil and to have the 2018 World Cup, due to be hosted by Russia, to be taken away from Putin’s nation. I support both ideas. But I also know there is absolutely no chance of any of this happening whatsoever.

For a start, FIFA awarded Russia the tournament in the first place and it’s not as if Putin’s aggressive foreign policy is something brand new. The 2018 World Cup was awarded to Russia in December 2010, long after the 2008 Russian incursion into South Ossetia. The body that governs football globally has never been great at ensuring that despotic regimes are not granted the oxygen of what is arguably the biggest sporting event on Earth. A good example is the 1978 World Cup, when it was held in Argentina as it was being run by the murderous junta that was able to use the tournament as a valuable PR exercise in the wake of Videla’s enacting of “The Process” – an elimination of all of Argentina’s enemies, real or imagined.

Then there is the way that FIFA is internally governed itself. Although there are many disasters I could have picked throughout the history of the organisation, one only need look at the “re-election” of its president, Sepp Blatter, in the summer of 2011 to summarise FIFA’s approach to democracy. I put the key word there in quotations, as Blatter was the only candidate on the ballot after the man running against him, Mohamed Bin Hammam, had to withdraw in what could only be described as very suspicious circumstances. So why would an organisation that tacitly supports despotism within its own corridors be motivated to battle it exteriorly?

FIFA’s shenanigans constantly thwart those who wish to see football as a force for peace or at least togetherness in the world. On the question of Russia and the next two World Cups, we know what will happen next. Absolutely nothing.  Regardless of what is to come in Ukraine.