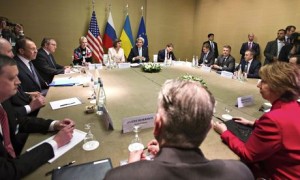 What is it about Geneva and international discussions that don’t go anywhere? In January of this year, I wrote an article for the New Statesman about the Geneva II talks on the Syrian crisis. That summit didn’t end in an agreement at all, which cannot be said of this week’s roundtable to try and defuse the crisis in Eastern Ukraine; Russia, the US, the EU and Ukraine signed a deal on Wednesday that, on paper, should at least be the first step on the road to peace in the region. But I think both sets of Swiss-held talks will amount to the same thing in the end: the west looking beaten by a determined and, for the moment at least, a seemingly unstoppable Putin. For while an agreement was indeed reached between all of the necessary parties, it was in fact falling apart as it was being signed.

The pro-Russian demonstrators in the towns of Eastern Ukraine, offered amnesty in return for their surrender, have refused to step down. This fits Russia’s narrative perfectly. They appear to have tried to be reasonable, but in the end, so their narrative goes, they could not halt the “irrepressible will of the Russian speaking people” of the east of Ukraine. This is nonsense, of course – Putin could stop the whole thing anytime he chose.  The Americans know this, at the very least, and were talking down what they expected to get out of the whole agreement. Obama described it as a “glimmer of hope” – hardly a ringing endorsement. No “peace in our time”, although like I said, the fact that the Americans aren’t being overly naïve here is the one actual glimmer of hope in this whole mess.

Of course, this is mostly down to intelligence. The Americans simply know too much of what is happening on the ground in Eastern Ukraine to be fooled by Putin’s pantomime innocence. Trouble is, they ultimately don’t think Ukraine is important enough to confront Russia over, at least in a way that will make Putin think twice. And they know that Putin knows this. So any threats issued by the US sound hollow. It looks like the next stage of the crisis in Eastern Ukraine will be further towns falling to the Russians, with Putin’s legion of mouthpieces all denying any culpability. Then we’re starting to look at a divided Ukraine, with the Ukrainian oligarchs potentially won over to Putin’s side by promises of their assets being protected. The people who would lose terribly if this happens would of course being the people of Ukraine – whether they live in the west or the east.

I wish the Geneva talks could have represented an advance in working towards a positive outcome for everyone in Ukraine. But it looks like simply more of Putin’s games, his attempts to humiliate the west and make it look divided and weak bearing fruit yet again.