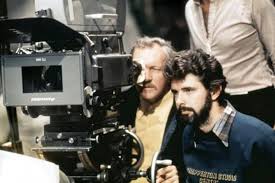 Anyone who has sat through all of the Star Wars prequels and knows a little bit about cinema will be able to tell you that not only are they all terrible films, they are all extremely poorly directed. Furthermore, that each subsequent prequel is notably more badly directed than the one that preceded it. At least The Phantom Menace, for all its annoying kids and racist cartoons, had some bits of it that were sort of like a real movie. By the time we get to Revenge of the Sith, the whole thing is shot like a soap opera, with characters walking and talking very slowly then stopping at a predictable moment so that George can go to shot-reverse shot over the shoulder crap. I feel certain that if George had submitted Revenge of the Sith as his USC graduation film, he’d have failed his course.

All of this has led to historical revisionism about Lucas and his directorial ability. The line of thinking goes thus: the prequels were bad, yes but so were the original Star Wars flicks and actually his early films were stinkers in retrospect as well. I would like to counteract this narrative, declare it false; Lucas was actually, for a short but significant period, the most talented film director in America, and the complete loss of his ability as seen in the prequels is a tragedy.

His first feature film, THX 1138, is one of the boldest American films of the 1970’s. Many US filmmakers of the time were in love with French New Wave cinema, and with Godard in particular, but they only ever paid the occasional on-screen homage to their inspiration – a jump cut here, the odd sound affect there. Think Scorcese and Mean Streets for an example. But Lucas eschews the tricks and absorbs the two most difficult things from French New Wave for American audiences to handle, pace and tone, and goes to town with them. The film starts with a long drawn out sequence, a tracking shot intercut with another tracking shot, then another; over the soundtrack, a repetitive computer like voice drones on and on, the same message over and over again. I’ve never seen anything like it in American cinema.

This led to his second feature, the one that made him a “star”: American Graffiti. This is where the “Lucas was always shit” crowd tend to get really stuck; the out of nowhere hit of 1973 is transparently both a good film and a very well-directed one. It focuses on one night near the end of the summer of 1962, which is a significant time period to cover in a film for an American audience. A constant trope of American films, books, and pop culture in general is the idea that the Kennedy assassination in 1963 represented “the loss of innocence”; the split between an idealised past period and a dystopian present and future. The English equivalent of this is the start of the First World War and the end of the Edwardian period, the nostalgia for which is still getting people to sit through bullshit soap operas in which people wear period clothing.

The charm of American Graffiti is its almost documentary like feel, an absurd thing to say about a period piece I realise, but one that Lucas pulled off nonetheless. This was his strength as a director, which is odd given it is his biggest weakness as a writer – down the lenses, he could really get under people’s skin, figure out what made them tick. He would have been a brilliant documentarian, I think. At least the young George would have been.

So what happened? Well, he directed Star Wars, in 1976, and the experience was so shattering that he didn’t direct another film for twenty-two years. And when you don’t do something for two decades, you get a little rusty. Add this to the fact that the inspiration he had in his youth had deserted him (which happens to a lot of artists), and you get Attack of the Phantom Sith. But go back and watch American Graffiti and then tell me you think George Lucas never had any talent. Once you’ve done that, reflect on the fact that’s it’s okay that sometimes people are great at stuff and then they lose the greatness somewhere along the way. That’s just life.