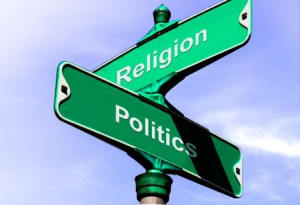 After a long absence, the Lord of all has suddenly re-entered the political stage in this country. Quite why I’m not really sure, but let’s start with the relevant examples.

We start at the top, with the Prime Minister of the nation. At the Downing Street Easter reception last week, Cameron declared: “Jesus invented the Big Society – I’m just continuing God’s work”. He also made a claim that is dubious at best: Christians are the most persecuted religious group in the world, apparently. I can think of some instant counter claims to that argument, but let’s park that and move on. He talked later on about the Bible and bearing other’s burdens. It all sounded very pious indeed.

All right, so far, so Tory. So the leader of the Conservative Party wants to try and shore up the oldie vote with a vow to Jesus. That proves nothing, right? Except now the Leader of the Opposition has decided to get in on the act. He told the political lobby, in a statement released today, that he feels that faith has a “nourishing” role to play in society. He made a strange vow to become the first Jewish Prime Minister in British history (hold on, what about Disraeli? Does he not count?). He then went on to say that we were lucky to have the Church of England as a state religion and described it as “a great institution”. To be fair, he also copped to the fact he’s an atheist, but still, he obviously felt the need to talk about the man upstairs in the first place.

This all makes me question where the sudden need to talk about faith is coming from. Is this the result of some upswing in Godliness in the Great British Public? I mean, you’d think the desire to fill this gap must be coming from some internal polling (apologies for being so cynical here, but let’s be realistic). Has there been a sudden upsurge in people sat in focus groups telling the monitors behind the one-way mirrors that they want their elected officials to spout more ecclesiastical disquisitions? All I know is that I quite like how secular British society is and also feel that the lack of religion in public life is a nice barometer of our country’s tolerance levels. So when everyone starts to speak in tongues, I get a wee bit nervous. I have a tendency to see all of this as part of a package that includes Nigel Farage and an increased intolerance, even on the left, for foreigners.

I’m probably putting too much onto monotheism’s door here, I’ll admit that much. But I still don’t have to like all of this faux (at least in Miliband’s case) spirituality from Britain’s leading politicians. Hopefully it will fade after the Easter weekend comes and goes. I can only pray.