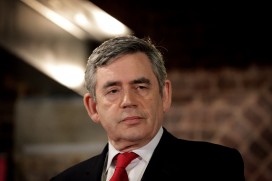 Last Friday, at Portcullis House, Gordon Brown gave his first Westminster speech in some time. It was on the topic of why the Union should stick together, why Scotland should stay. Throughout this speech, which I’ll say now I thought was excellent, we saw exactly what the Scotland No campaign has been lacking all the way through. And it’s something that is always, always crucial in politics: heart.

I am not a Labour supporter, nor have I ever been. I also thought that Brown was a terrible Prime Minister while he was in office, and while that view has softened slightly, I still think it was pretty much a disaster. So when I arrived at the Atlee Suite on Friday morning, I didn’t expect to be moved. But I was. I found myself clapping, a little choked up at the end, alongside a room full of mostly Labourites.

This is because Brown’s reasons for why Scotland should remain part of the UK were both coherent and compelling. The first portion of the speech was a little dry, a touch technocratic, but it soon got going. He laid bare the lies the Scotland Yes campaign have peddled about the NHS in Scotland, explaining how and why the Health Service north of the border is heavily subsidised (it has one third of the landmass of the island but only one tenth its population – the less dense, more spread out populace creates problems only money can solve. Scotland’s population is also older than England’s). He talked about the currency in a plain spoken way, wisely leaving aside the “will we be allowed to use the pound/won’t we?” argument that has blown up in Better Together’s face to simply focus on the fact that an independent Scotland using the pound would put the Scots in a quasi-colonial relationship with the English; they would be at the mercy of whatever the Bank of England wanted to do for the good of the rest of the UK, even if it wasn’t necessarily good for Scotland, no Scots around any longer to make the case for their country’s needs.

But I come back to heart. Whatever else you may wish to say about Gordon Brown, he deeply cares for the Union and sees its continuance as something central to his vision of a better future for everyone in the British Isles. He described it as the most successful working together of nations in the history of the human race, and whether I believe that to be the case or not, I know for Brown these were not mere words. He made a positive, left of centre argument that was rousing – this is exactly what Darling, or indeed anyone in the Scottish Labour Party, has failed to do thus far. And given the swing vote in this is in left wing, Central Belt, Labour or ex-Labour voters, this presents a huge problem.

It’s ten days until the referendum. What those in the No camp should do now is look at Brown’s speech in detail and crib from it as much as possible. The time for details about what independence might look like/not look like has passed. Now’s the time for heart. I’d have Brown speak more, in fact; despite his reputation not being that stellar in England post-premiership, he’s still a very popular figure in Scotland. Perhaps he doesn’t want to be anymore involved at this stage. All I know is, if I were working on the Better Together campaign, I’d start begging Brown right now. Because while it is just one poll, statistical error, all of that, that’s not something I think should be relied upon. The No side must use everything it’s got.