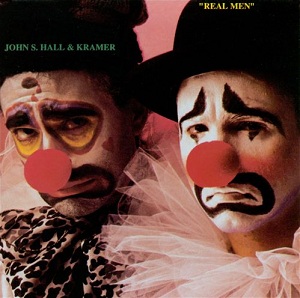 I guess talking about “albums” is pretty old school. What do the kids call collections of songs by leading artists nowadays? I guess they probably don’t.

Anyhow, back when albums were a thing, a great yet now mostly forgotten one was released in 1991. It features the vocals of one John S Hall, who was at the time the lead singer of King Missile. His band had just been signed to a major label, Atlantic, and the year following Real Men, King Missile had a rather large-ish hit with the epic “Detachable Penis”.

Real Men was done on the Shimmy label that had released all of King Missile’s pre-Atlantic material, a label set-up and owned by a producer named Kramer. The album is a straightforward collaboration between the two men, with Hall writing the lyrics and reading them, with Kramer providing the soundscapes to go underneath. They seem to be perfectly in tune with one another though; you would think, had you not been alerted via the album name and cover (Hall and Kramer as morose clowns, something never referenced in any of the lyrics), that it was all the work of one person.

The recording is both a parody of beat poetry and an earnest attempt at an album of beat poetry. In other words, I get the feeling that Hall really wanted to make a spoken word album and knew that in 1991 the only way he could get away with this was by sending up the genre. It’s not all that different to King Missile’s material, in which Hall did a lot of spoken word stuff, but I actually like it a lot more than any of the band’s material. It has a kind of edginess and energy that Missile always lacked, and is also funnier.

I can convey the tone of the album by describing a song called “Knowledge”, in which Hall talks about the mysteries of life (while Kramer has some music from “Plan 9 From Outer Space” drone in the background), saying: “Knowledge, knowing you can’t ever step back onto the ledge you jump off of”, before following that up with, “What a load of shit eating drivel”. It’s the Butthole Surfers, “art is just fart without the f” approach to being artsy, by hiding it in self-deprecation and piss taking.

My favourite lyric on the whole thing is the closing line of “Spanish Armada”, in which Hall discusses what might happen should he invite the 16th century naval power over to his house for tea, while Kramer plays what is the cheesiest mariachi music I’ve ever heard in my life. Hall talks about what they might argue about before concluding, “But I don’t speak Spanish, so that probably would never happen.”

King Missile didn’t last long on Atlantic. “Detachable Penis” turned out to be the only thing even approximating a hit they ever managed. Hall is now apparently a lawyer in Manhattan, having given up on a music career. Finding Real Men used to be a real challenge, but these days everything is on ITunes, including obscure early 90’s spoken word albums, so it is readily available. The thing that keeps me coming back to the recording is the way it has a knack for cheering me up no matter what, its perfect mixture of profundity and complete silliness always enough to put a smile on my face. Might do the same for you, who knows.