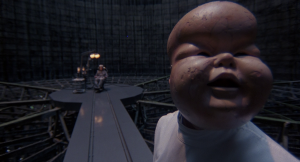 Watching the World Cup on TV and hearing Ary Barroso’s “Brazil” at every ad break has reminded me, in a strange way, of what I used to adore about cinema, back when I did. You see, I sort of fell out of love with movies. The reasons for this are complex and I won’t bore you with them now, only they do involve rubbing a fish on myself on a UCL theatre stage, making a movie about Texas in mid-Wales, and having Danny Dyer call me a “c**t” on-screen. I’ll tell you all about it some day, promise.

But for now, I want to talk about the greatest movie of all time, which is “Brazil”, released in 1985 and directed by Terry Gilliam. In fact, the more I think about it, the more and more I become convinced it is the greatest piece of cinema ever, and by quite a wide margin too.

For those of you who know nothing about it, it is probably best to start with Gilliam’s working title, which simultaneously explains everything about the film and yet nothing whatsoever: “1984 ½”. From that the more literate/film literate at the same time can work out that means the film was intended as a mash-up of Fellini’s “8 ½“ and Orwell’s “1984”. Thing is, Gilliam claims he’s never read Orwell’s masterpiece and weirdly I believe him. The story unfolds like something written by someone who has been inundated with ideas derived from Orwell second-hand, but who has never actually read anything by the late, great Eric Blair. In other words, a bit like what someone might imagine Orwell was about having not read his works. That combined with the Fellini aspects (it borrows a lot more from “8 ½“ than anything else) and the inevitable Monty Python sensibility is a big part of what makes it so brilliant.

The film is about a man named Sam Lowry who has a perfectly acceptable existence, working in what feels a bit like a sort of Ministry of Truth – yet he longs for something more, something slightly intangible, even to himself. He dreams every night about a woman, a woman from his imagination that he has never met. What makes his existential angst so difficult to deal with is that no one around him seems to be feeling the same. There are many villains in the movie, but my favourite is Jack Lint, played with memorable genius by Michael Palin. Actually, I need to diverge just for a second here. Michael Palin is one of the great unsung actors of all time, in my opinion. It might seem absurd to single out a Python as underrated, but hear me out. I always thought he had the greatest range of any of the Pythons and in “Brazil” he proves it. I’ve seen all of the great horror movies in the history of cinema, as well as sitting through most of the video nasties, yet I think Palin’s Jack Lint is perhaps the creepiest villain I’ve ever come across. Because his evil is so mundane, so unthinking. His job is to torture people for information and he’s brilliant at it because he seems to genuinely see no wrong whatsoever in doing it. There is no conflict in Jack Lint. He’s been asked by the powers that be to do a job and he just gets on with it. In Palin’s Lint you can see reflected the great atrocities of humankind – I was only doing my job, guv. Somehow I find this personality type so much more unsettling than the ego driven Stalins; yes, they are mad, but their madness only pragmatically works through people like Jack Lint. They could be stopped, but they are somehow allowed to continue.

Eventually, by chance, Sam finds the woman of his dreams. Or at least someone who looks an awful lot like her, only she is the exact opposite in many ways from what he has dreamt about. The woman in his nocturnal imaginings needs rescuing, a damsel in distress; her real world doppelganger is a feisty, no shit taking rebel. What happens is that Sam falls in love with her almost separate to her looking a twin of the girl he’s been dreaming about. He realises he needs to be saved and that he is not in any position to save anyone himself. Male powerlessness has rarely, if ever, been so beautifully put on screen.

The newly minted couple attempt to escape to some sort of imaginary world beyond the quasi-Oceania they are trapped in, but it is of no use; there is no reality whatsoever outside of the nightmare they live in, either physically or metaphorically. They are remnants of an older idea of humanity and are destined for extinction. Sam ends up being tortured into submission by Jack Lint in the final, crushing scene.

The thing I really love about “Brazil” is it’s liberalism, and I don’t mean that in an overweening political way. It’s essence is that even though most of the citizens of this strange world appear to be pleased enough living in dystopia, Sam and his girlfriend Jill are deeply unhappy and by design have no way to resolve this dilemma other than be brainwashed or killed. It reminds me of the paradox that ultimately brought utilitarianism down: what if everyone in the world could be happy, so long as one single child was kept in a cell and tortured every day as a payoff? Despite whatever feeling the collective good stirs in us, each of us knows, instinctively and deeply, that the innocent child being made to suffer for the rest of us is intrinsically wrong. This is because individuals are fundamentally important in and of themselves.

Anyhow, if you haven’t seen “Brazil”, please do. And if you have but not for some time, see it again. If you’ve fallen out of love with cinema like I did, it may rekindle your amour.