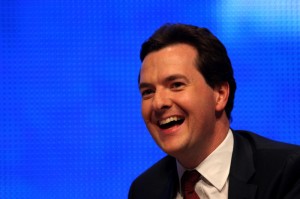 The Autumn Statement went well for George Osborne, something that all but the most ardent hammer and sickle waving comrade would have to concede. But he’s followed it all up with some bizarre statements to the press over the last few days. Here’s an example:

Now, correct me if I’m way off here, but I thought George Osborne’s whole shtick revolved around the shrinking of the state as a positive thing. The idea that the public sector is too bloated and that a large swathe of what is currently paid for by the government could be done better by the private sector. Then he tells us that cuts are instead “a price that works for our country”, basically telling us that they are actually a bad thing after all. This appears to be George deserting his own basic economic principles, right at a time when he seems to have won the argument.

What’s even stranger about this sudden disparaging by Osborne towards public spending cuts is that with UKIP abandoning hard right economic policy and going all “Help Save the NHS” on everyone, an Osborne-sized space in British politics appears has gotten even larger. The Conservatives seem to spend all of their time thinking about how to solve “the UKIP problem” and then a solution presents itself, one so obvious they can’t see it.

Osborne also has had some harsh words for his current coalition partners:

“What they are offering is a chaotic alternative of higher taxes, higher borrowing and a return to economic chaos. Britain doesn’t want to come back to square one.”

Also, I don’t think his whole scaremongering about “chaos” should the Lib Dems be in the same position after May 2015 really works either. The two parties have managed to work together for almost five years, after all. I think what Osborne should have said now (and what I expected him to be saying) was that he would have cleared the deficit had it not been for those soft-hearted Lib Dems pulling him down. And that if given a chance to govern on their own, the Tories would clear the deficit promptly and then start cutting taxes. Isn’t this what their audience wants to hear?